NetTec Boost is a Wi-Fi booster that extends the range of your home internet, allowing users to say adios to lost Internet signals and dead spots while being able to push up to 300Mbps in data transferring speeds.

You install the device in your home within minutes, then enjoy smoother, stabler internet throughout your home. It's ideal for large homes with multiple dead zones.

Does NetTec Boost really work? How does it work? Find out everything you need to know about the device today in our review.

NetTec Boost is a wireless internet range extender. You plug the device into an electrical outlet, connect it to your home's Wi-Fi, and enjoy a stabler internet in dead zones of your home.

If you have a large home or backyard, then internet coverage can be frustrating. Maybe you only get one or two bars of Wi-Fi when you're in your backyard or garage. Maybe there are dead zones in your home. 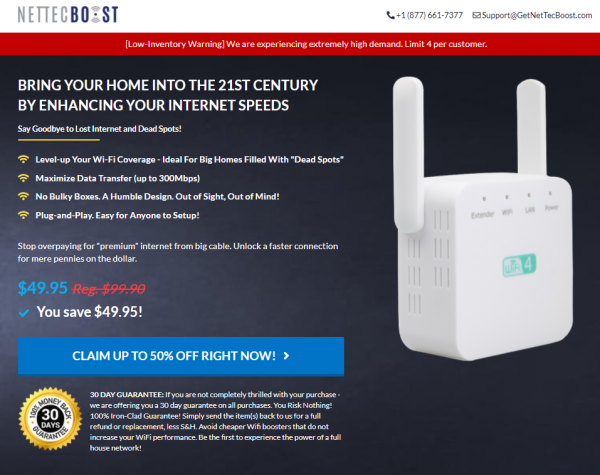 Devices like NetTec Boost solve this problem. They extend your wireless internet beyond its current range.

Although NetTec Boost does not actually speed up your internet, the device promises to "maximize data transfer," giving you speeds of "up to 300Mbps." This is slightly misleading, as it only supports 300Mbps speeds if your home has a 300Mbps internet connection (from your ISP). NetTec Boost will not actually speed up your internet - it only extends its range.

NetTec Boost is exclusively available through GotNetTecBoost.com, where the device is priced at around $50.

How Does NetTec Boost Work?

Typically, these devices are priced at $20 to $100 and extend your wireless internet range. They propagate your current wireless network without increasing speeds. They give you more of your internet wherever you need it. 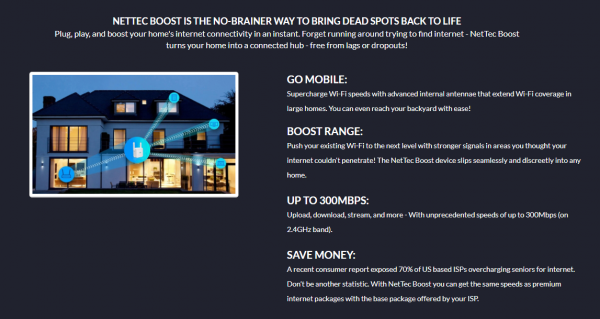 NetTec Boost features a plug-and-play setup, which means you just plug it in, and the device starts working quickly.

The front of NetTec Boost features four lights to indicate whether it's working, including:

If the device is working correctly, then all four lights should be on or flashing. That means you installed NetTec Boost correctly, and the device is relaying internet throughout your home.

Please note that NetTec Boost does not actually increase internet speeds despite claims made on the official website. It simply expands your current internet to new areas of your home.

The website claims you can increase internet speeds using the device:

It is possible to improve internet quality in certain areas of your home after installing NetTec Boost. If you only get slow, 1-bar internet in your backyard with your current wireless network, for example, then NetTec Boost could give you better coverage in your backyard. However, your internet speeds will not change.

Bring Dead Spots Back to Life: NetTec Boost lets you avoid dead zones in your home. Maybe you get bad Wi-Fi in a certain bedroom.

Maybe you can't get Wi-Fi from your backyard or garage. NetTec Boost solves this problem, expanding your wireless internet coverage.

Boost Range and Coverage: NetTec Boost increases the range of your wireless internet. It relays your Wi-Fi to a new area of your home. Wherever you install NetTec Boost, the device will spread the internet in that surrounding area.

Supports Speeds Up to 300Mbps: NetTec Boost will not increase your internet speeds. However, it does support internet connections up to 300Mbps. If you have 300Mbps internet from your ISP, then NetTec Boost supports speeds up to that level.

Plug and Play Setup: You can install NetTec Boost with limited technical skills or experience. The device comes with a plug and play design, which means you simply plug it in, connect it to your Wi-Fi network, and enjoy better coverage.

Never Lose Internet Coverage Again: By installing NetTec Boost in the right area of your home, you can avoid ever losing internet coverage again.

Slim Design: NetTec Boost is not a large item. Like other wireless network extenders, NetTec Boost is about the size of a bulky wallet. The device features two antennas sticking up from the top, but it's easy and discreet to install anywhere in your home.

Although the sales page claims to increase internet speeds, NetTec Boost will not actually increase speeds.

NetTec Boost is priced at $50 per device, with discounts available when ordering multiple devices: 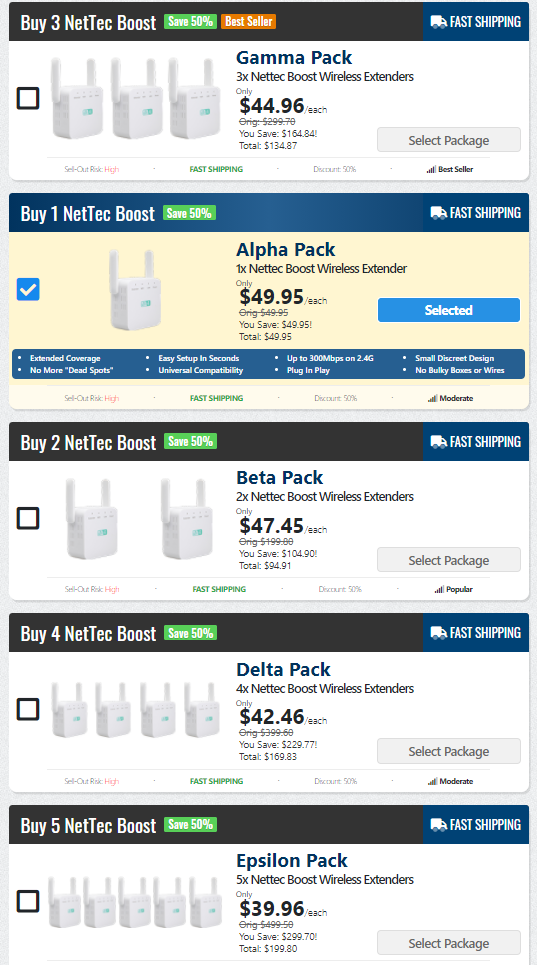 Watch for hidden fees. The company hides its costly $9.95 shipping fee at the bottom of the sales page, and it's easy to miss.

NetTec Boost comes with a 90-day refund policy. You can request a complete refund on your purchase within 90 days.

The company will deduct original shipping costs ($9.95 per order) from your refund, so it's not technically a full refund.

If you are unhappy with the speed, coverage, or quality of the internet provided by NetTec Boost, then you are entitled to a complete refund.

NetTec Boost is marketed online by a New Jersey-registered eCommerce company. That company appears to source electronics from Asian factories, selling them online to western markets. Although the company claims to be American-owned, it's unlikely that NetTec Boost is made in the United States.

You can contact the makers of NetTec Boost via the following:

The company will respond to all inquiries within 24 hours.

NetTec Boost is a wireless internet extender that works similarly to other wireless extenders on the market. The device relays the internet to new parts of your home, expanding coverage to your backyard, attic, and all corners of your home.

Overall, NetTec Boost Extender should work as advertised to boost internet coverage, although it's higher end, so it is a bit more expensive than competing devices available online. There are a few negative reviews about the NetTec Boost WiFi Booster, but most of which only pertain to some 'dishonest marketing' tactics done by a few of its referral partners. The biggest problem about the NetTec Boost complaints seem to center around how the branding targets seniors and those who have limited knowledge of technology, but that is not much of a moot point to disregard all of the above average attributes this unit allows for as a plug and play device.

So aside from these few marketing mishaps that are currently circulating online about the NetTec Boost Extender, this legit WiFi booster can be found on its official website with the lowest prices due to the incredible discount savings being offered today.