2 Firms Are Moving Human Prosthetics into the Age of AI

While process automation has been the thrust of most robotics companies, the biotech industry has focused mainly on creating new drug treatments based on recent genomics breakthroughs. And yet, some of the most innovative work in both robotics and biotech is being done out of the spotlight, where these groundbreaking new fields of endeavor overlap: robotic exoskeleton technology.

It's not about replacing people with robots, and it's not about finding a molecule link to treat disease. It's about augmenting and extending human abilities and enabling people to function around damage that no gene therapy will soon cure.

The robotic exoskeleton niche is still small, but it's growing fast. That's because such companies as ReWalk Robotics (Nasdaq:RWLK) and Ekso Bionics (Nasdaq:EKSO) are finding new ways of restoring and enhancing the reach and stride of their customers.

After a rough start, ReWalk breaks through

Gene Laureano was a U.S. Army veteran working a welding project in New York until, one day in 2001, the ladder he was standing on collapsed from under him. As he suffered a severe spinal cord injury, few would have ever expected him to walk again.

Possibly the only ones who would have were seven time zones away. They worked at ReWalk, which was founded that same year in Israel. It wouldn't be until 2013 when Laureano finally met the ReWalk team at his local veterans' hospital, when the company was invited to engage in clinical trials there.

"I was at a point where I felt I was just existing," Laureano says, narrating a video on ReWalk's YouTube channel, "occupying space in the world."

He was downing opiates to manage the pain, "succumbing to my disability," as he says. But now the exercise he gets by using the ReWalk Personal 6.0 System has strengthened his muscles and improved his mood. 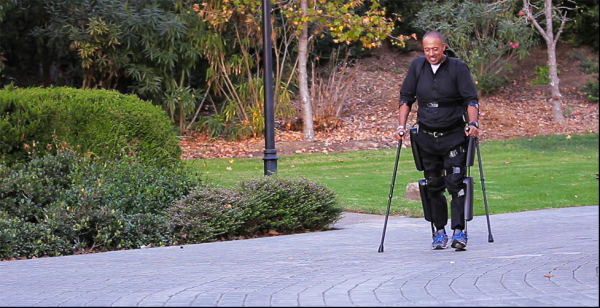 Meantime, ReWalk has been making a name for itself as the Tesla of prosthetics for its futuristic medical device innovations for people suffering from lower limb disabilities. Laureano and many other ReWalk Personal 6.0 System users can now move their hips and knees, enabling them to stand, walk, change directions and - to some extent - climb stairs.

Flexible enough to be used indoors and out, ReWalk's exoskeleton ensures a precise fit, guaranteed safety, comfort and functionality. The ReWalk Personal 6.0 System is the first exoskeleton to receive regulatory clearance for both personal and rehabilitation use in the United States.

Like any prosthetic, though, it is highly customized, so one size does not fit all. In fact, there are some lower limb disabilities for which an exoskeleton is not indicated. For them, ReWalk offers ReStore, a lightweight exo-suit designed for a very specific use case.

"Unlike a traditional exoskeleton, exo-suits are made of soft, flexible fabrics, and do not contain rigid supporting structures that can restrict movement," according to Kathleen O'Donnell, ReWalk's product management and strategy director. "This allows the exo-suit to provide targeted assistance that synchronizes with changes in the patient's own gait, making ReStore a perfect fit to help retrain walking function for patients in rehabilitation programs after a stroke."

With time - and the data it brings - the functions of ReWalk's Personal System 6.0 exoskeleton and ReStore exo-suit just keep improving. As patients change their centers of gravity to facilitate movement, every change is detected, providing a stream of data for both the therapists and the machines.

And yet, ReWalk stock has hit the doldrums. Investors seem to have valued it more when it was highly experimental and positive earnings were still beyond the horizon. But now that quarterly losses are a couple orders of magnitude smaller than they were four years ago, the buy side has lost some interest. Considering that the medical equipment industry's one-year projected earnings growth rate is 72%,  though, this might be the wrong time for them to take their eye off this stock. The private placement market seems to agree, as $40 million were invested in February.

Short-term challenges are to maintain existing momentum in adding more insurance companies to cover these futuristic prosthetics. Sure, there are studies suggesting that ReWalk device users end up spending less on medical costs over the long term, but carriers can sometimes be slow to respond. Still, ReWalk is finally making clear, solid progress, especially with European insurers and with the U.S. Department of Veterans' Affairs.

Its initial product was the Human Universal Load Carrier. Even though it's called HULC for short, it actually has more in common with Iron Man. It attaches to an exoskeleton and enables the wearers to carry the weight of equipment far in excess their natural capacity.

"Imagine you're a soldier operating at 6,000 feet [above sea level] ... and being asked to take 120 pounds in that thin air - how exhausted you'd be once you got there," according to Ekso program manager Jim Ni. But HULC "provides the ability to carry that weight the same distance, but to have the energy left to execute the mission once you're there."

But Ekso sold off that product line to Lockheed Martin and now focuses on other applications: healthcare and industrial.

The new products are direct descendants of HULC - pneumatically powered exoskeletons. These current offerings, though, enable paraplegics to stand and walk with crutches or a walker. Force and motion sensors provide the data the system need to interpret the intent of the user - stand up, walk in a straight line, site down - and translate it into action.

The flagship product today is the EksoNR, a software-driven exoskeleton for rehabilitation institutions. It comes with a touchscreen controller and allows patients to focus on both gait and pre-gait activities.

On the industrial side of the business, Ekso has been working on EVO, an upper-body lifting exoskeleton that can be worn like a vest. While Ekso was content to sell the military capability of such equipment to a focused Pentagon contractor, there's still plenty of room in the civilian world for the same function. Ekso will be concentrating on markets involved in construction and logistics operations.

Like ReWalk, Ekso is not yet a profitable company, although Zacks reports its quarterly revenues doubling year-over-year. Still - again, in the same boat as ReWalk - Ekso's stock is trading toward the low end of its 52-week range.

Ekso does have a lot going for it. Last June, for example, the FDA extended its approval to use EksoNR for traumatic brain injury as well as spinal cord injuries and stroke.

The wind is definitely at the backs of such companies as ReWalk and Ekso. While they are still slogging their way toward profitability, there is little doubt that there are markets and use cases for their products. As price points decline and insurance coverage kicks in, human exoskeletons could soon prove to be as valuable to investors as it is already to its small but growing number of consumers.