Did you know there are an estimated 1.7 billion websites in the world? And with another 120,000 being created each and every day, the level of competition for consumer's attention heightens.

Astonishingly, there are now 4.66 billion active internet users, which is over half of the world's population. It's figures like this that help cement the internet as a pillar of our global culture, providing a medium for people all over the world to gather, communicate, and share information at the touch of a button, which adds to the intrigue of analyzing the data. 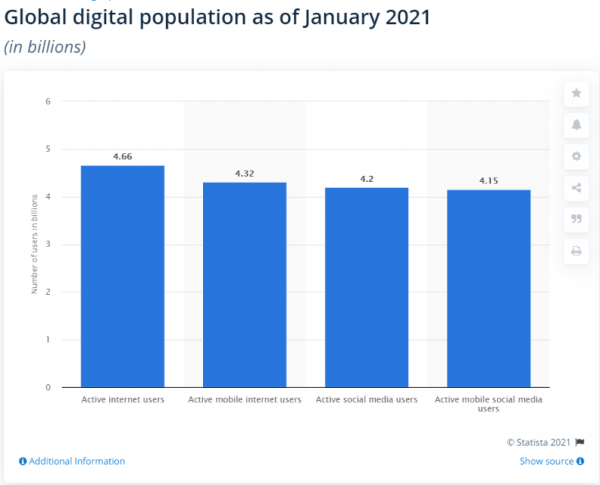 On that matter, observing the top websites in the world has always provided a fascinating way of gaining insight into our global culture as we can take a look at how the vast majority of the population utilizes the internet. In many ways, this information reveals where we are as a society and what topics, industries, and forms of entertainment we gravitate towards.

With that said, in this article, we will take a look at the top streaming websites online and how a select few have managed to dominate the charts and capture the attention of billions of people around the world. Let's jump into it.

Believe it or not, YouTube comes in second place on the chart for most visited websites in the world. Ever since the first-ever YouTube video was posted back in 2005, the streaming behemoth has gone from strength to strength, and it doesn't look as though it's ready to slow down any time soon.

Amazingly, the Google-owned website boasts over two billion monthly active users and has over 30 million daily users watching over a billion hours of video every day. For every one hour you spend watching a video, another 30,000 hours of fresh content will have been added.

But, what is the key to YouTube's success? Well, it's hard to pinpoint it down to one particular aspect. Still, many people theorize that it's got something to do with a large cultural shift away from mainstream media towards more authentic and relatable media sources.

With that said, YouTube has plenty of other strengths that are tied to its success, such as:

Interestingly, YouTube has the highest average visit duration time out of any other website on the top 50, standing at 21 minutes and 52 seconds.

Aside from YouTube, there are tons of on-demand entertainment websites in the top 50 websites, and many of them have soared in popularity over the past 18 months - and there are no prizes for figuring out why!

Yep, the global pandemic increased the demand for these streaming services quite substantially. As millions of businesses were closed, and people were forced inside to help prevent the spread of the virus, people turned to sites like Netflix, Amazon Prime, and Disney+ for their entertainment.

However, out of all the services mentioned above, the standout winner from them all is Netflix, ranking at 16 on the top websites in the world. The video streaming giant added 36 million new subscribers to their service in 2020, with a staggering 16 million of them coming in the first quarter alone.

It will be interesting to see how these websites fare in the coming months once the world starts to wrestle control back over Covid-19 and normality starts to return. Seeing as people will be permitted to go back outside and interact with others, it seems likely that these numbers will drop significantly, but how much remains to be seen.

Gaming Is On The Rise

Finally, it's hard to ignore the tremendous growth of the gaming industry over the past decade. What was once considered a niche market reserved for "nerds" and basement dwellers has gone on to become one of the biggest entertainment industries in the world. By 2023, the video game market is predicted to reach a global value of around $200 billion, which is significantly more than the entire film industry (including box office and home entertainment revenue).

As it turns out, one of the biggest success stories to come out of the industry isn't one particular game or console; it is a streaming website called Twitch. Currently, Twitch is the 26th most popular website in the world, beating the likes of TikTok, Bing, and eBay.

Amazingly, the average user spends around 96 minutes on the platform, and around 46 billion minutes of gaming content are consumed each month. This demonstrates just how popular the platform has become, and it solidifies gaming as a staple of our entertainment and internet consumption.

We've seen an exponential increase in the popularity of streaming platforms in recent years, mostly as we search for a way to keep ourselves occupied while at home. Although much of their recent popularity can be attributed to the global pandemic and the resulting shifts in consumer behavior, streaming platforms seem as though they are here to stay (and in a big way).

There's no denying that on-demand video platforms like Netflix and Amazon Prime have gradually displaced existing media outlets like the Hollywood film industry. Still, you could make a fair argument that the figures may be inflated due to the present global situation. In any case, it will be exciting to see how these platforms perform in the future and whether or not sites like Netflix, Twitch, and others can maintain their dominance.