Gene-drive technology can now suppress the growing numbers of mosquitoes that carry malaria.

A group of researchers discovered that this gene-editing technique can eradicate the vectors that could rapidly populate in a particular environment. 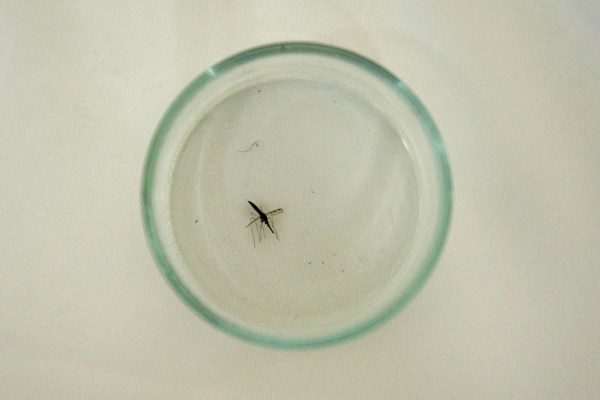 (Photo : LUIS ROBAYO/AFP via Getty Images)
A mosquito (Anopheles albimanus) is prepared to be studied in a laboratory at the Center for Scientific Research Caucaseco in the outskirts of Cali, Colombia, on April 25, 2012, during the World Day for the fight against malaria. After Colombian physician Manuel Elkin Patarroyo developed a vaccine against malaria in 1986, Colombian scientists keep researching for another immunization for the illness, which in 2010 caused over 855.000 deaths all over the world. A team of 40 scientists is preparing to begin the second phase of chemical tests for a synthetic vaccine against malaria. Malaria is caused by the Plasmodium vivax and Plasmodium falcitarum parasites, and is transmitted by mosquitoes.

In a study entitled "Gene-drive suppression of mosquito populations in large cages as a bridge between lab and field" published on Wednesday, July 28 on Nature.com, scientists used genetic engineering to create a special class of mosquitoes that would exterminate those that carry malaria.

According to the researchers, their main aim is to develop a weapon that would lessen or wipe out the malaria-spreading mosquitoes.

Most importantly, they applied the DNA sequence called "gene drive" to the male mosquitoes.

Ruth Muller, one of the researchers who is an entomologist at PoloGGB, said that what they did was a "big breakthrough" in science. Somehow, the scientists are also thinking of freeing the genetically modified mosquitoes someday, but it would take some time to ensure that it is applicable.

The world has been suffering from the continuous aftermath of malaria. Annually, there are over 400,000 deaths worldwide in more than 200,000 million individuals affected by the disease, NPR.org reported. The majority of the victims are children.

The "doublesex" mutation for female mosquitoes renders them helpless, which causes them to lose the ability to bite and adopt the deadly parasite responsible for malaria. In addition, the affected mosquito species will not be able to reproduce further since they are now deprived to lay eggs.

According to Dr. Tony Nolan, a senior lecturer from the Liverpool School of Tropical Medicine, the scientists were able to incorporate the gene mutation with the gene-drive technology.

Scientists First Test the Malaria-Spreading Mosquitoes in a Lab

The experiment might be useful for the regions with high rates of malarial spread, but somehow it might disturb the natural flow of the ecosystem. For that part, the scientists initially experimented with the mosquitoes in a basement lab in London. They observed that those mosquitoes with malaria were being killed by the genetically modified mosquitoes.

The researchers also conducted a test in an Italian security lab so that they would secure the population of the gene-drive mosquitoes. The cages in this location were bigger than those in London.

According to the authors of the study, in less than a year, gene-drive technology has successfully decreased the population of natural mosquitoes in the wild.

In 2018, Bill Gates financed this research in order to combat malaria spread among mosquitoes through a technology that kills each other during sex.

Related Article: Scientists Wipe Out Over 80 Percent Of Disease-Spreading Mosquitoes In Experiments