The Technology of Meat

Remember when people used a 3D printer to create little globs of plastic "somethings" that generally looked like they were about to melt? Well, those days are over. These amazing inventions are now capable of making bionic arms with "multi-grip functionality," a slew of different airplane parts, and even entire houses... and there are plans for 3D-printed dwellings on Mars. But there's one application for 3D printing some may be surprised to hear about.

An Israeli start-up now has patent-pending technology for printing 3D meat. -Seriously. By digitally mapping more than 70 sensorial parameters, the company - in cooperation with top chefs, taste experts, and even butchers - can literally print out a slab of "steak" that comes with the right fat distribution, the correct texture, enough juiciness, and, of course, the look of beef. Like something out of sci-fi, the machine prints out, layer by layer - using many different ingredients - what they term alternative or "alt-meat." Redefine Meat's meat also comes with "alt-fat," "alt-blood," and "alt-muscle." The result is reportedly a zero-cholesterol, high-protein version of a steak that even cooks like beef.

Speaking in June 2020, CEO and Co-Founder of Redefine Meat Eshchar Ben-Shitrit, noted: "Today's announcement marks the start of a new era in alternative meat - the Alt-Steak era - driven by production processes that will accelerate the development of a wide range of alt-meat products and create a sustainable alternative to raising and eating animals. The importance of using 3D printing technology to achieve texture, color, and flavor cannot be overstated. By using separate formulations for muscle, fat and blood, we can focus on each individual aspect of creating the perfect Alt-Steak product."

Those are some lofty claims, but do they hold up in the real world? Apparently, they do - at an astonishing rate. "Blind tests" were carried out in January 2021. In various Israeli towns, people were told there was a food truck in the area that carried the slogan: "there's a new meat in town." Meat-lovers chomped down happily and were then informed that what they had eaten was 100 percent plant-based. Asked to rate the "meat" for taste, feel, etcetera... the product scored a "90 percent like real meat." -That's darn near perfect. 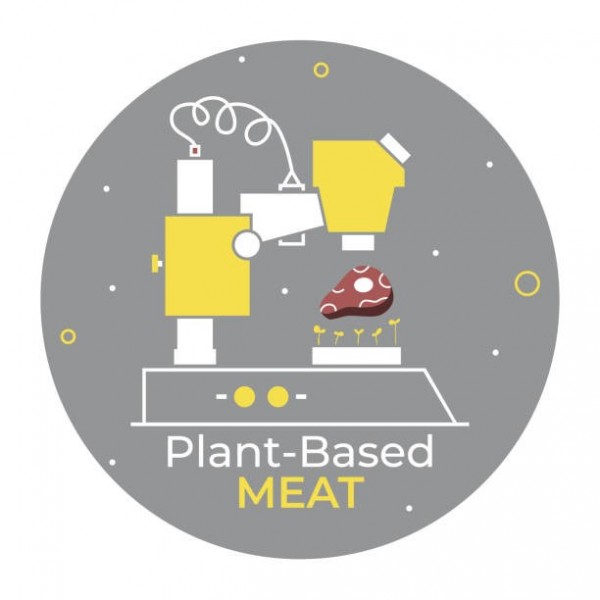 (Photo : The Technology of Meat)

You don't have to be a rabid vegan to appreciate a solution such as 3D printed "alt-meat." The planet is over-taxed with the water and space demands of cattle, and we all know the beef industry - as it is today - is unsustainable. Yet the demand for beef rises each year. Rising incomes in China mean more people can now afford a nice juicy steak. We can't just keep destroying rainforests in Brazil to plant more soybeans to feed more cows. Health concerns are also a real concern with obesity and heart disease linked to red meat consumption. These realities have made an impression on more people than one might think. Non-meat eaters including vegans, and vegetarians, are estimated to make up almost 14 percent of the global population! The number of people who've "gone vegan" in some places has grown so profoundly that The Economist declared 2019, 'The Year of the Vegan.'

But while the number of vegans and vegetarians - especially in North America, Australia, New Zealand, and Europe - is at an all-time high, only a select few of these people are likely to reject "alt-meat." Meat tastes good. People don't generally become vegetarians because they hate things that taste good, they do it for health, eco reasons, objections to cruelty and killing, and other varied reasons. There is a market for "alt-meat" that spans meat-eaters and non-meat eaters, and Redefine Meat knows it.

Meat alternatives are among the fastest-growing segments of the food industry. Estimates say they will be worth US$140 billion by 2030... a number that will be sustained or exceeded annually from then. It took a while for consumers in the west to accept that there were problems with red meat, such as its links to heart disease, and its toll on the environment. It may take a while longer before huge Asian markets such as China, India, Indonesia, and others jump on the bandwagon - but they will - and when they do, the profits are going to be astronomical. Redefine Meat's website menu list keeps growing and they now list burgers, kebab, sausage, ground beef, and more. All of these options are 100 percent animal-free and do not use any ingredients from animals, or in a word: vegan. But again, these "alternative meat" products were made to appeal primarily to meat-eaters looking to reduce their meat intake. And of course, vegetarians and vegans are also welcome at the table.

Some folks will never become "alt-meat" converts. The radical vegan who says "the smell of meat disgusts" them, or on the other side of the aisle, the hyper-carnivore who almost needs to kill the animal themself to enjoy eating it. But those are the fringes - and not worth giving much thought to, as from an economic standpoint, they don't matter. Redefine Meat is already on menus at select restaurants in Israel - restaurants known as places to go for "prime meat." The market seems to be speaking, and the verdict is a firm "yes." Most of us - and that    includes non-meat eaters - accept that meat tastes good, and if there's an option that's unencumbered with morality issues connected to the raising and slaughtering of livestock, as cheap or cheaper than real beef, better for your health and better for the environment, and as the biggest plus ... something that tastes delicious - we're ready to order.