Bluetti's ever-evolving technology has hit quite the success in the past with the AC200, with 1700Wh capacity. However, the company did not stop there. Bluetti launched the AC300, bringing that number to almost twice the capacity of the previous model along with an LFP battery module, the B300.

For the ultimate experience, users are advised to stack up with the AC300 with at least one B300 battery to get started. When maxed out at four battery modules, the whole setup is capable of 12,288Wh of capacity! The humble starting set AC300+B300 already packs a 3,072Wh capacity of its own.

The AC300+B300 battery package is the perfect portable set that can easily be carried up the stairs, outside the van, or even in remote camp settings by carrying the modules one by one. Aside from the outdoors, the power station combo works as a great backup for indoors as well.

The best part is that it is controlled by an app, making it really easy to turn on. You will be able to control your AC300+B300 while you are busy doing other things through the simple Bluetti app. Create an account. Log in. Connect. Control your setup all from the palm of your hand! 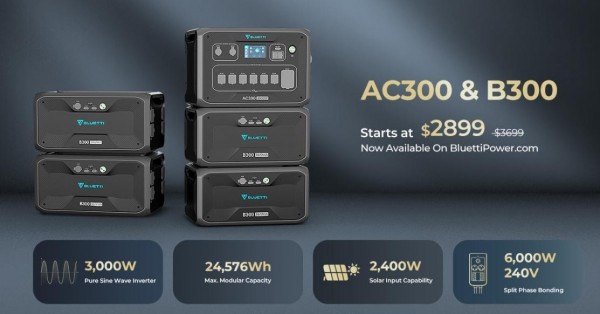 Although solar charging might be ideal for some, it is not always practical either for those who do not have the resources or those who are in a location where solar or renewable energy is hard to reach. The best part about this power station is that the charging process is very inclusive:

All of these are packed into one, converting solar energy and grid energy into clean electricity for all your connection needs. 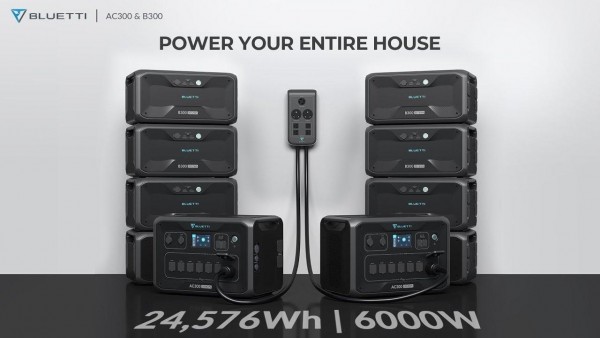 Why Choose the BLUETTI AC300?

Portability should never come in the way of power, and this is something Bluetti understands to the core. Instead of cutting down on the total performance, Bluetti takes a modular approach, making it easier to create a setup exactly like how you might need it.

Exclusivity is also something factored out. The Bluetti AC300 takes a more inclusive approach, making it easier to charge and even easier to use. The level of power you might need for your AC300 can always be adjusted by adding or subtracting B300 battery modules just in case you might need only a specific amount of power. 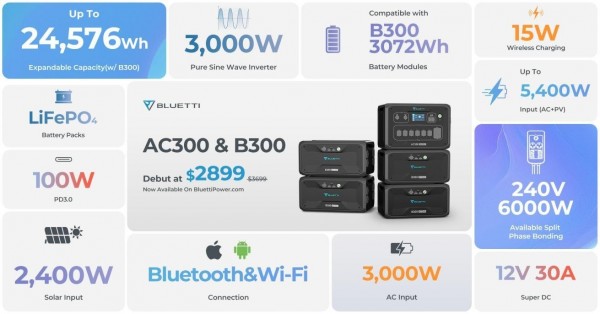 Although all products usually receive mixed reviews, the Bluetti AC300 is hard to talk down not just due to its uniqueness but also due to its performance in general. There have been a lot of modifications done to upgrade the AC300 from the previous AC200, like the model's charging capacity.

It is important to note that reaching 100% charging efficiency is quite complicated since most traction battery systems usually show a minimum of 20% to 25% charging loss during normal charging.

Where To Buy the AC300; How Is It Delivered?

All brand new BLUETTI products can be bought on the official website: bluettipower.com.

Also, for all one-stop shopping, a total amount of thousand bucks can be saved when buying certain AC300 solar bundles. Orders will be delivered in 3-5 weeks from the purchase date, according to Bluetti's statement. Sheer power at a modular setup. Control how much power you want, how much hardware you want to bring, and how you want to charge up your power station module.

If you are looking for raw power, then it's quite simple. Look no further; get your power on Bluetti's official website.