If most fight promoters had received the call that their main event boxer - scheduled to fight in only one week - had tested positive for Covid-19 and would miss the fight, they would have folded their tent and gone home. Instead, Triller Fight Club owner Ryan Kavanaugh found a new fighter, picked up his tent, and moved it across the country. For good measure, Kavanaugh landed a former President to provide color commentary.

Oscar De La Hoya's highly anticipated comeback was set for September 11, in a bout versus former UFC champion Vitor Belfort. The two were set to headline a Triller Fight Club card at Los Angeles's Staples Center that would also be broadcast on cable television and pay-per-view.

Then, disaster struck. On September 4, De La Hoya announced he had been hospitalized with Covid-19. "Preparing for this comeback has been everything to me over the past months," De La Hoya told fans on Twitter, with a photo of him in a hospital bed.

Kavanaugh first made sure his fighter was getting the best care possible. Then, instead of scratching the event and moving on to the next one, Triller's Ryan Kavanaugh, in the best traditions of show business, decided: the show must go on.

How Ryan Kavanaugh Made It Happen

Kavanaugh, the celebrated founder of Relativity Media and controlling owner of Triller, started making calls. His first was to former undisputed world champion (the only boxer to hold the title at both cruiserweight and heavyweight) Evander Holyfield. Holyfield was set to make his comeback in an earlier Triller Fight Club bout that could not be scheduled. Now was the opportunity. Kavanaugh told Holyfield - step in for Oscar De La Hoya and fight Belfort. Holyfield agreed.

However, the fight was not on yet. California would not sanction the bout. This was a second point where most would have given up. Not innovative entrepreneur Ryan Kavanaugh, who stated "The thing I'm most proud of in businesses is that I'm always told, 'That's impossible; that won't work.' " Many times, he has made the impossible possible. This time, he would do so again.

Kavanaugh packed up his fight operation and his fighters and decamped to the Seminole Hard Rock Hotel & Casino, in Hollywood, Florida. State officials would sanction the fight. The show would go on.

"For the first time ever, we have an entire boxing event the same week," Ryan Kavanaugh reported via YouTube. "We moved from California to Florida. We changed our opponent from Oscar De La Hoya to Holyfield."

"And, we brought in Donald Trump to commentate," Kavanaugh says in the video. "The first time ever there's been a President of the United States commentating on a flight live, no holds barred."

Of course, there was still another hurdle: The concern that Holyfield would be too much for Belfort.

"Holyfield's biggest concern was that he was going to harm Vitor, since he wasn't a boxer," Kavanaugh said. "Holyfield is known to be a great boxer and always in shape. I shared the concerns with Vitor, and assured me he was ready and in shape."

Still, because of the worries that Holyfield had an unfair advantage, Kavanaugh proposed to both fighters that the result of the fight would not go on their records.

To verify his concerns, Kavanaugh checked the odds the day before and the day of the fight, and, indeed, the betting houses showed that Holyfield was favored.

Tickets to the 7,000-person Hard Rock Live arena sold out hours before the first fight. When Trump was added to the broadcast, online pay-per-view orders jumped. The thing that seemed impossible only days earlier now looked like it was actually going to happen.

On the night of the fight, Kavanaugh sped through Miami traffic in a black Chevrolet Suburban, trying to get to the Hard Rock at the time he'd been told by Trump's advance team, and still working the phone to make sure last-minute fires were being put out.

Arriving at the Hard Rock, Kavanaugh ran through a loading dock entrance and made his way to the broadcast suite, where Trump and Donald Trump Jr. awaited. Kavanaugh shook hands with the former president, told him about the event and took a video of Trump and Trump Jr. talking about the night's fights that was posted to social media to boost last-minute pay-per-view sales. The audience saw Trump in the broadcast suite and chanted his name. The atmosphere was electric. At last, the bell rang, and the first fight on the undercard started. The event was underway.

Three hours later, after Belfort was awarded a TKO over Holyfield, Kavanaugh climbed into the ring and grabbed a microphone. He was already moving onto the next thing: A $30 million, winner-take-all challenge to YouTuber-turned-boxer Jake Paul to fight Belfort. The crowd roared. Moments later, Belfort recorded a video calling Paul a "coward" if he wouldn't fight him.

That still wasn't the end of the wild ride. Holyfield was visibly upset immediately after the fight was stopped, complaining it should not have been.

Indeed, the broadcast of the fight shows Holyfield effectively blocking Belfort's punches early on. When Holyfield slips and falls through the ropes, it's because he threw a roundhouse at Belfort and missed. When he fell backward, Holyfield said it wasn't Belfort's punch that put him on the mat, but the fact that Belfort stepped on his foot, preventing Holyfield from catching himself.

All of this, Kavanaugh said, is why he is now talking to Holyfield about another comeback.

For entrepreneur and boxing promoter Ryan Kavanaugh, the show goes on. 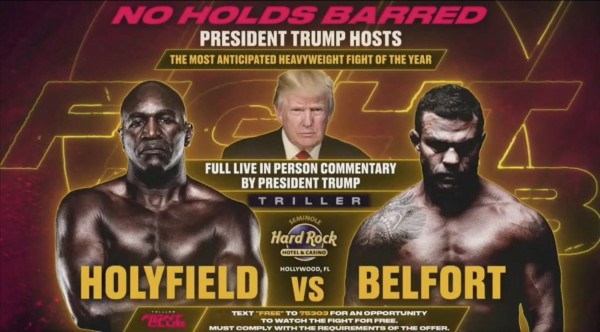