Halloween 2021 has a new central theme globally, and it is with the hit Netflix Korean drama and thriller series of "Squid Game." Now, it has taken a wave all over the world for its fresh plot and elements, as well as its uniform that has taken on the difference of a player and a guard, becoming one of the key focuses of the film.

Netflix is easily one of the most popular streaming platforms in the world today, and it brings a lot of features for users of the app, like the 'Play Something' and 'Laughs.' However, it does not move away from the basic feature of Netflix which is to stream content, whether it be the bought rights for movies or Netflix Originals like this K-Drama. 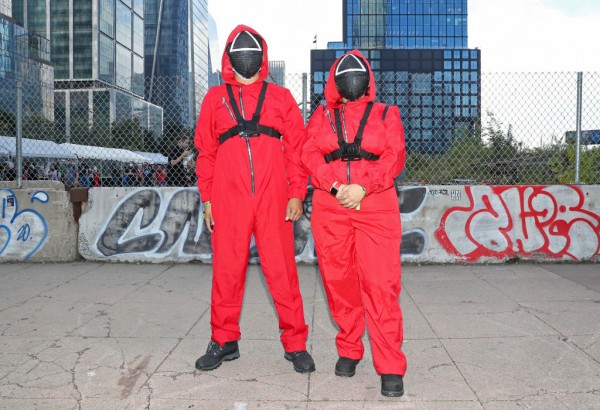 Halloween 2021 would be somehow different from 2020, as last year has seen a spooky season without the vaccine yet, and going out may result in getting infected with the virus. Now, it may be a little safer, as a lot of people have already received their vaccines, but it is still advised to wear masks.

Last year has seen massive popularity of InnerSloth's detective game of "Among Us," which focused on a platform multiplayer title where people deduce who is the impostor and killer.

However, 2021 has a new player, rather, players in town, as the Netflix thriller "Squid Game" has introduced a new aesthetic for the Halloween season, where people could dress up too.

It is a fairly easy costume to wear, and it is with either a "Player" that gets to wear a tracksuit with numbers or a "Guard" that is given the jumpsuit with a mask in the series.

Get drafted to play at the "Squid Game" lore, where users are given numbers for a name and given a numbered shirt and jacket to match their designations. Also, this gets tracksuit bottoms and plain, white flat shoes to complete the look.

It is available via Amazon and Etsy, ranging from $29.99 to $33.00 for the Jacket and Bottoms (for Amazon) and the jacket only (from Etsy). Shoes can be any flat shoes or can also be bought via these e-commerce platforms for a complete look.

Younghoodie offers a complete set of shirts, jackets, and bottoms for $49.99 only.

On the other hand, join the game master and the program of "Squid Game" by becoming the ruthless guards that enforce the rule on the games, as well as maintain order and be unaccountable for killing off people.

It is important to note that it is prohibited to take off the mask so that others would not know your identity.

An Amazon seller offers the red jumpsuit for $29.99 only, and it is unisex and available from small to extra-extra-large sizes.

On the other hand, the mask is available on the same link but is priced per piece for either the Round, Square, and Triangle prints on the mask. The seller also has the "Front Man" mask, which is known as the game master of the "Squid Game" series.