The beta update was limited to a handful of users in the UK and did not make its way to users in the U.S. However, publication SamMobile has been vigilant in gaining access to the beta update and was able to post a gallery of images that show the Galaxy S6 and Galaxy S6 Edge running on Android 6.0 Marshmallow.

"Samsung is no longer accepting new participants for the beta, but we've been running Android 6.0 on our S6 and S6 edge and have a lot of images to show you how the latest version of the operating system looks on the two devices," noted the publication. "Android 6.0 brings many changes to the interface. The status bar and quick toggles menus are now fully white instead of blue, the power menu has been redesigned (quite poorly, we might add), and a few app icons have been changed as well."

So what do the images reveal? The gallery offers a glimpse into the changes in the UI, with the most notable visual change being to how we see the app icons. Previously, the icons would appear as shadowed image, but now they appear as a flat image rather than the op-up 3D ones.

(Photo : SamMobile) Samsung Galaxy S6 Edge running Android 6.0 Marshmallow and showing a glimpse into the app icons which are now white and flat.

Moreover, Samsung has redesigned some of its own icons as well and introduced the option of downloading novel themes that are color based. Basically, users of the Galaxy S6 and Galaxy S6 Edge will be able to download palette-based themes from the theme store so you can make the menu and icons red, pink, blue or any hue you choose.

The power menu has also been revamped to become minimalistic and the quick toggles menu and the status bar menus now sport a completely white instead of blue hue.

Samsung has also imbibed a new option to its camera app's Pro Mode for shutter speed. However, the new shutter speed option is only available for the Pro Mode.

Some icons have also been redesigned and now Marshmallow's vertical app drawer forms a part of the TouchWiz launcher.

The update also brings several new Google features such as Google Now on Tap, advanced permission management systems for apps and the Doze mode to save battery.

Android 6.0 Marshmallow beta update for the Galaxy S6 and Galaxy S6 Edge possibly bring tweaks that are under the hood. However, the image gallery does not give any indication if features such as multi-window support are now available on the smartphone.

Check out the slideshow to see the Galaxy S6 Edge and the Galaxy S6 running on the much-awaited Android 6.0 Marshmallow software. 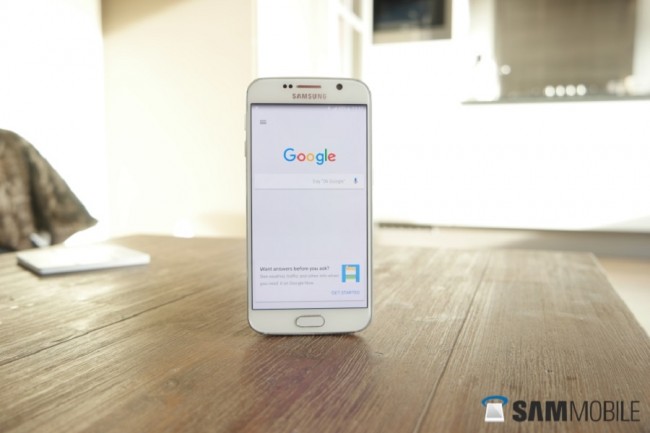 Samsung To Unwrap WELT, Rink And TipTalk At CES 2016

Samsung Is Gearing Up To Launch A 12-Inch Windows 10 Tablet In Early 2016: What To Expect