Death Stranding is finally here! And people are getting mixed reactions, especially after a few gameplays have come out before its official release. Others are saying they were disappointed that it didn't include that much action as they hoped and that it's an exploration game in between long cutscenes.

However, many are still siding with Hideo Kojima and Kojima Production's vision--especially when it comes to Death Stranding's mysterious plot and compelling storytelling.

Suffice to say, it's not a game for everyone. Still, it does deliver that uniqueness we've all been looking from an eccentric legend like Hideo Kojima, being free with his ideas and without big corporations holding him back.

Although the reviews are mixed, Forbes has reported that Death Stranding currently has a score of 83 on Metacritic, and 13 reviews have given it a perfect score. 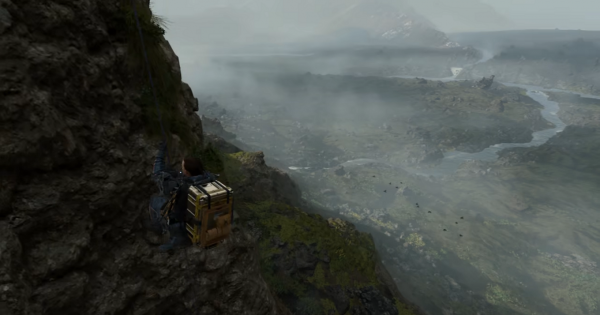 (Photo : Screengrab from PlayStation)
Leave behind equipment that players after you can use, the same way Death Stranding players before you have done.

The lowest is 35 out of 100, mainly because of its strange and bizarre premise and its "singular intention."Despite the negative things about the game, the voices of doubt, and disappointment from some, many are still anticipating its arrival--and here it is finally.

That's why we've also gathered some tips for beginners who'd like to get stuck in Death Stranding's strange world for hours.

The main thing you'll do as Norman Reedus' Sam Porter Bridges is connecting the post-apocalyptic world through deliveries--and there's a lot of it throughout the game where you have to travel from one point to another to deliver the cargo.

One of Polygon's tips is to make multiple, small trips instead of overloading Sam's backpack, draining his stamina and making him prone to falling over.

However, if you do keep on falling over, there seems to be a simple trick to avoid this -- that's by never letting go of both the R2 and L2 buttons. However, you'll have to walk slower than usual.

Additionally, Polygon has suggested that you put your faith to other players before you when it comes to equipment. That means you don't have to carry two ladders, and that three of anything is "just silly."

Instead, players before you will leave behind the equipment that can help you walk across that raging river or a rope to help you climb down a cliff, and these are free to use. Or, you can open your map and look out for green things as you can use this equipment during your delivery. 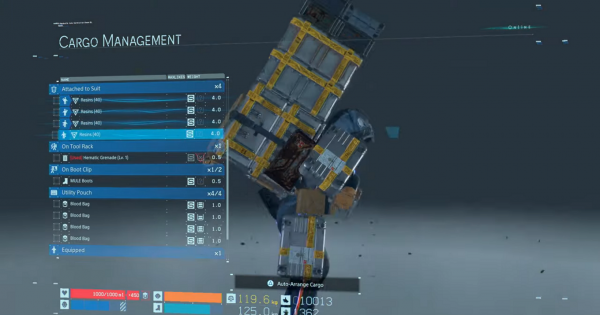 (Photo : Screengrab from GameSpot)
Death Stranding tip: arrange your cargo or use the Auto-Arrange Cargo option.

Meanwhile, GameStop has also suggested that you make use of Death Stranding's Auto-Arrange Cargo option, which can be found in the Manage Cargo menu screen.

This option can help you arrange your cargo effectively--but not always.

There are specific items that will require certain placements, such as the crytobiotes, that need to be on top of your cargo, to avoid contact with water. You'll have to reorganize some stuff that doesn't seem to be perfectly placed, but the auto-arrange option is a great way to arrange Sam's backpack.

If you want to take a break from the tedious work as a delivery man, you can take a breather, and Kotaku has found the perfect video for your break time: a Death Stranding video where all the characters are Hideo Kojima, himself.