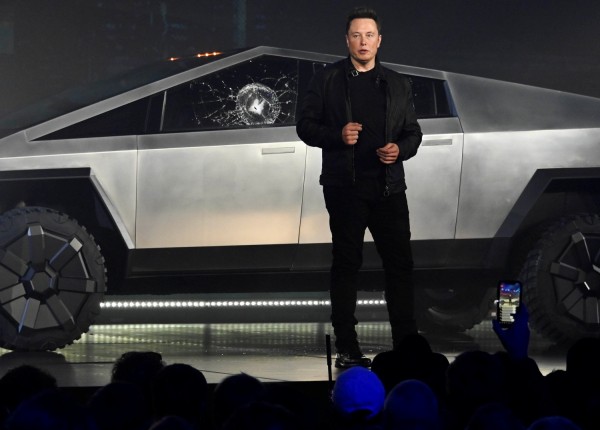 On Nov. 21, Tesla CEO, Elon Musk, unveiled the company's electric Cybertruck at a promotional event held in Los Angeles; however, the electric vehicle's debut didn't go exactly as planned as it suffered severe humiliation after a botched exhibition that was meant to showcase its armor glass.

What Happened at the Cybertruck Launch?

Initially, Elon Musk has meant to show off the strength and durability of the Cybertruck's armor. Before the actual demonstration, a video played on screens showing a bullet striking the vehicle with no apparent effect. With that, Elon Musk claimed that "It is literally bulletproof to a 9mm handgun, that's how strong the skin is."

Unfortunately, the demonstration immediately went wrong as the window cracked after the company's design chief, Franz, hurled a metal ball at it. As if it wasn't awkward enough, Musk encouraged Franz to throw the metal ball again, this time at the passenger's window; but sadly, it cracked as well.

This exhibition blunder became the talk of the town after the event, but Elon Musk simply shrugged it off and said that they have improvements to make before the production.

This statement came in the form of a tweet a day after the launch, showing a behind the scene video of Franz, the company's design chief hurling the same metal ball at the unaffected Cybertruck's window before the unveiling.

ALSO READ: Everything you Need to Know About Tesla's New Pick-up Truck

How Did it Affect Cybertruck Sales?

Admittedly, critics thought that what happened in the launch may critically affect the sales of Tesla's Cybertruck. Without a doubt, one of its selling points is its armor; hence, it's only logical that it may affect the electric pickup truck in a bad way. But despite the embarrassing demonstration, it seems that a lot of people are still interested in buying Tesla's Cybertruck. On Saturday, Nov. 23, Elon Musk announced that there are already 146,000 orders of Cybertruck as shown on Twitter.

This number is steadily increasing as it went up to 187,000 a day after his first tweet, and finally, 200,000 on Monday, November 25, Musk claims that these numbers were collected without the help of advertisements and paid endorsements.

The data show that, even with the botched debut of the electric pickup truck, Cybertruck shows promising capabilities that make it interesting; hence, it's natural to expect that the number of people who will pre-order the vehicle will increase as time passes.

How Can You Order a Cybertruck?

In addition, you can freely choose the design of the Cybertruck to your liking. In fact, configuring it now and adding the self-driving feature secures the price of your Cybertruck as its price or rate increases in the future; however, you will have to pay a fee amounting to $100 upon ordering.

But rest assured, the payment, as stated on the website, is completely refundable. It also states that the production of the Cybertruck will be in late 2021, while its Tri-Motor AWD production is expected to begin in late 2022.

ⓒ 2021 TECHTIMES.com All rights reserved. Do not reproduce without permission.
Tags: Cybertruck Tesla Elon Musk How to Order a Cybertruck
Most Popular