Artificial Intelligence (AI) is on its way to becoming the defining technology of our time. There are lots of uses and advancements around it that can back up this claim. But if we were to choose only one, that definitely had to be deep learning. This is a tech that's part of a series of machine learning methods based on artificial neural networks capable of mimicking how a human brain works.

As impressive as it sounds, deep learning is growing in leaps with every passing week and it still has a lot of room to improve. In its journey, it's being applied to multiple tasks, from speech recognition to computer vision and, though all of those efforts are amazing in their own ways, there's one that stands out - natural language processing (NLP).

Through it, software engineers are trying to come up with systems able to understand humans in normal interaction. In other words, an NLP-based system could be so advanced that it could talk with a person as if it were human. That's mind-blowing, even without considering what it takes for a machine to rise up to that level - understanding intent, comprehending context, handling semantics and grammar, among many other things.

A perfect NLP system doesn't exist yet but research is taking huge steps towards it to the point they outsource quality assurance to help them move forward. One of the latest developments around it? The use of graph convolutional networks to recognize emotions in texts. Can you imagine a computer reading a paragraph and being able to tell if the writer was being funny, ironic, or angry? That's precisely what this sophisticated method is trying to do. Let's take a look at how that will work, at least on a theoretical level. The studies can also be found in Assocation for Computational linguistics.

Before getting into the complex explanation waiting ahead of us, it's important for you to know a couple of essential terms that can help you grasp it all. So, here's a list of things you need to learn before moving on:

Your main takeaway here should be that what we're going to look into here is a computational process that mimics the human brain using convolution operations to interpret graphs. Now it's time to see how it all comes together when it's used on ERC.

Emotion Recognition is like the Holy Grail for NLP enthusiasts. If a system could be so advanced that it would be able to pinpoint the emotions of a piece of text, we'd be closer to an AI-based platform capable of talking to us - like if we lived on a sci-fi movie. Creating such a platform could launch the development of intelligent robots and systems that would revolutionize our education and healthcare as well as the way we sell things or how we work.

The methods used until today for ERC were Recurrent Neural Networks (RNN) and Attention Mechanisms. Without getting too much into them, let's say that their results are far from perfect, even when the two methods are combined. That's because they both have an issue when considering contexts beyond the text (personality traits, topics, and intent).

Since context in communication is everything, systems that use RNN and Attention Mechanisms aren't precisely efficient. That's the main reason why researchers started to look into deep learning as a way to come up with a more sophisticated way of tackling ERC. That's when the GNCs came in.

The importance of context

We said that context is everything and that's undebatable. Let's see an example to prove it. If you read "It's fine" you could understand it in several ways. You can take it at face value (the thing is fine), you can see it as a resigned expression ("it's fine..." as in "just leave it at that"), you can even see the irony in it (an "it's fine" with a mocking gesture). How could you know which interpretation is the right one? Through context.

In such a phrase, the context would be given by what was said before, how all the participants of the conversation are feeling, the past history between them, the atmosphere, and so on. We are able to discern all that in a text because we, as humans, have already integrated the "mechanisms" that allow us to tell whether one interpretation is correct or not. This stems from two types of context:

Naturally, for a GNC to work, it needs the data to be arranged in the form of a graph. That presents one of many challenges for the model. That's because how the heck do you graphic a conversation?

To create a conversation graph, it's important to understand the different elements that play a part in said conversation. So, the first place we can start is by considering the number of speakers involved. Each of those speakers "creates" a new piece of text and sends it to the other or other speakers in what research has called "utterance."

After understanding that speakers create utterances, it's time to understand that each utterance is connected to the rest in a contextual manner. Those connections are called Edges which, in turn, can be labeled according to the different needs. Said labels are called Relations. Additionally, all Edges have different importance for the context, which is defined as the Weight of the Edge.

Now we have all the elements we need to draw a conversation, including the speakers, their utterances, the edges, the relations, and the weights. Here's how it all comes together: 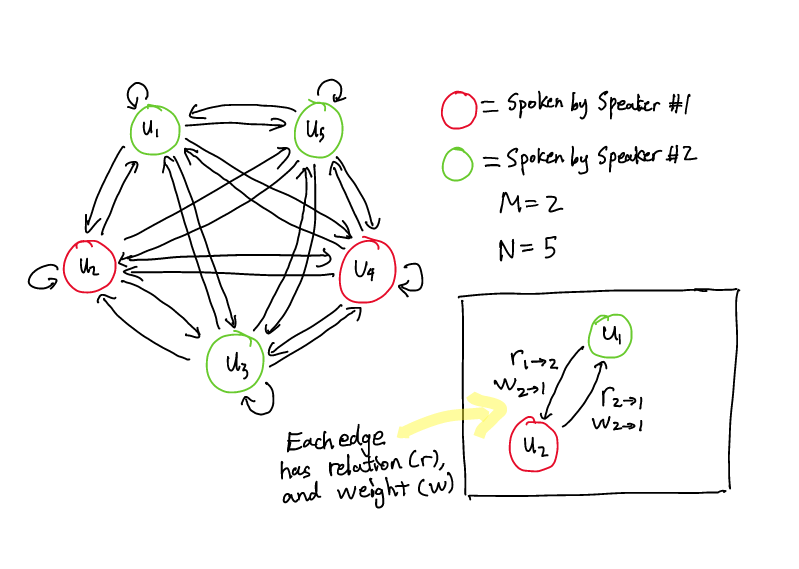 Of all these, Edges are probably the most complicated notion to grasp. That's why it is important to note 2 things about them:

Another important consideration to understand the model include the following:

Using the graph presented above it is possible to comprehend the way GCN works. Here's the visual representation of the process.

In the speaker-level context encoding stage, the data with the sequential context is reexamined and classified. Here, the edges are labeled with relations and the speaker context dimension is added. This is done through a 2-step process:

This process is one of the most important in the whole system, as this is where the classification gets refined and where most of the learning takes place.

When that process is done, it's time to move on to the classification stage. Here, the output of the first and second stages are concatenated for their classification. In other words, the data with the integrated sequential context is tied to the data with the speaker-level context through convolution to obtain a third data set, which will be the richest one and, therefore, the best input for classification. After the third stage, the GCN offers an output through a probability distribution that shows the different emotions for the different utterances.

Of course, that doesn't mean that the system is capable of assigning the right emotion to all utterances right from the start. In fact, and as it happens with all machine learning methods, the output has to be assessed and fed once again to the whole system with enough corrections for the GCN to run over it again and further its learning.

The training of the model is crucial to get better results. For that, researchers are using the following labeled multimodal datasets:

It's important to notice that only the text part of these multimodal datasets are used. However, researchers believe that there are instances where using the audio and the images for the training can be beneficial (as when assessing short utterances like "fine" or classifying similar emotions as "excited" and "happy").

What to expect now

As you surely saw, GCNs are very complex systems that need clear datasets, constant training, high processing power, and time to develop and get more accurate results. As they stand now, though, they are one of the best alternatives at ERC for AI-based solutions.

The most amazing thing about this is that graph neural networks can be the key to unlock the potential in NLP research. Understanding the relationship between the data through neighboring nodes is a revolutionary concept that can further the investigation. It's now time to continue experimenting and informing the systems and the underlying technologies to get significant improvements in what now is our surest path to truly intelligent AI solutions.

For a more comprehensive review of how GCNs work, read the fantastic introductory article from Kevin Shen in Towards Data Science.

And for more exciting open-sourced research on conversation understanding tasks such as ERC, here is an excellent repository https://github.com/declare-lab/conv-emotion by the DeCLaRe lab of Singapore University of Technology and Design.