Pokemon Go players are in for yet another opportunity to capture a new Mythical Pokemon. Earlier today, Pokemon Go's tweet mentioned, "Something Mythical is coming, Trainers," which shows a set of Pokemon footsteps printed on the mud.

Read More About: E3's Cancellation Was Inevitable BUT XBox And Ubisoft Will Host its Own Events Digitally 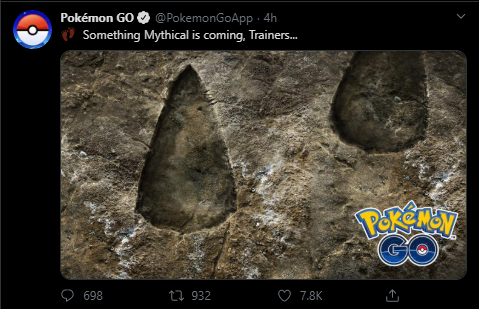 What Makes it Genesect?

It looks similar and about 110% sure that it looks a lot like Genesect would leave behind if he were in the game.

Genesect is a Generation 5 Mythical Pokemon that has triangular-shaped feet.

Back in the Pokemon GO March Events announcement, Niantic has hinted that a mysterious weekend event is coming over the dates of Mar. 20 to 23. As we get closer to the said dates, it's only right that the hype is starting already, and Genesect is something you'd like to get for yourself for sure. During the event dates, Normal-, Fire-, Water-, Electric-, and Ice-type Pokemon will appear more often than others in the wild.

Now then, Genesect's signature Techno Blast is an excellent skill to have to fight all these Pokemon for sure. Techno Blat is a Normal-type move that can change its type depending on which item Genesect is holding. For example, here is a quick overview.

Read More About: No 4K for Doom Eternal! Is Stadia Losing Their Grip?

What does it do?

One-star to four-star Raid Battles are going to be featured all throughout the event, which will be Bug- or Steel-type Pokemon, which are, of course, both Genesect's types in the game. So this is a no-brainer.

Something to add, Niantic has teased that the mysterious weekend event will be joined with a brand-new Special Research story event. Which pretty much sounded like a Genesect discovery storyline, don't you agree? We will keep you posted as we learn more about this and Mar. 20 is drawing closer, so there are more leaks for sure until the event comes out!

Read More About: EA's Command and Conquer to Release Remastered Collection: Will it Fail as Hard as Warcraft?