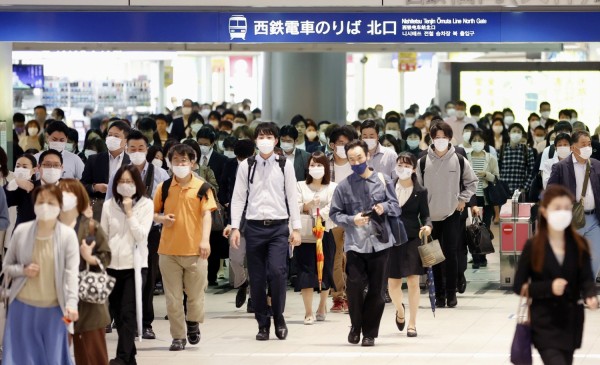 (Photo : Kyodo/via REUTERS)
Commuters wearing protective face masks are seen a day after the government announced the lifting of the state of emergency by the coronavirus disease (COVID-19) in large parts of the country including Fukuoka, in Fukuoka, southern Japan, in this photo taken by Kyodo May 15, 2020.

The number of suicides this April was down by nearly 20 percent compared to the same month in 2019, according to Japanese officials.

In April 2019, around 1,814 people took their lives compared with a 19.8% decrease to 1,455 in April 2020. This marks the country's lowest suicide figure for at least the past five years. Officials believe that not going into the office, less commuting and more time with the family are factors in which the Covid-19 pandemic has affected the well-being of people.

Lockdown steps mean that work from home and have fewer interactions with authority figures - including threatening bosses, colleagues, or classmates, DailyMail reported. It has a positive impact on the mental health of people, the ministry has found, given the pressures of living through a global pandemic.

Despite the decrease in suicide in recent years, a rise has occurred among adolescents. Bullying and other problems at school are commonly cited causes. The start of the academic year, which starts in April in Japan, is an especially challenging period for some. But its postponement due to the pandemic may have saved lives, at least temporarily.

"School is a pressure for some young people, but this April there is no such pressure," said Yukio Saito, a former telephone counseling official for the Japanese Federation of Inochi-no-Denwa. "At home with their families, they feel safe," she told The Guardian.

As for adults, "traditionally people don't think about suicide" during times of national turmoil and disasters, Saito said. She noted the decline in cases of suicide in 2011, the year of the massive Fukushima earthquake, tsunami, and nuclear meltdown. One contributing factor in the reduced suicide rate is the significant decrease in the number of people commuting to workplaces, where they frequently work long hours and interact with toxic co-workers.

Throughout Japan, suicide is seen as a significant social problem. Japan's suicide hotlines are still struggling to handle the influx of calls they get from people amid coronavirus pandemic.

Saito, who also served as chair of the Japanese Association for Suicide Prevention, said a prolonged economic downturn triggered by the pandemic could lead to a rebound in the cases. A massive rise in suicide cases of nearly 40 percent was recorded the year after the Asian financial crisis of 1997.

Japan Today reported many callers revealed concerns about their job security due to company closures or a dramatic decline in customer numbers. Other callers said they had suicidal thoughts after their family members were infected with the virus.

Saitama Inochi no Denwa, one of Japan's busiest hotlines, retained its 24-hour support operation. Several people each day openly confide their suicidal thoughts, the organization told Japan Today. Most callers are in their 40s and 50s, and during the economic crisis, discuss concerns about job security. Of the roughly 70 calls it has been receiving per day recently, approximately 70 to 80 percent are related to the coronavirus, the report added.