US Space Force Unveils Its Flag in the Oval Office with President Trump, Streamed From YouTube

US Space Force finally unveiled its flag, and the US President Donald Trump couldn't be happier. The agency was created in response to protecting the air space from threats beyond or within the galaxy. 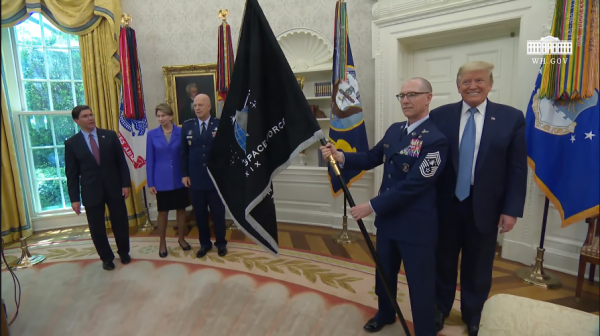 (Photo : Screenshot from The White House/YouTube)

Read More: New US Space Force Flag Will Be Unveiled Symbolizing The Expanded Missions of the US Military Service

The unveiling happened in the Oval Office

The White House channel on YouTube streamed the flag unveiling. According to President Trump, the new military branch was formed "[for the[ first time after 72 years plus." There are over 16,000 personnel in the new branch and it will continuously grow as the need demands. Along with Space Force personnel, Chief Master Sgt Roger Towberman did the honors of unveiling the flag.

The flag of the US Space Force looks similar to the fictional universe in Star Trek with their fictional army the Starfleet Command. General John Raymond, chief of Space Operations, explained the flag saying, "the delta in the middle is the symbol of the space community's use for years and years and years, the north start signifies our core values or guiding light if you will. And the orbit around the globe signifies the space capabilities that fuel our American way of life and the American way of war."

Trump said, "We should have started this a long time ago, but we've made up for it in space. We have developed some of the most incredible weapons anyone's ever seen, and it's moving along rapidly, and we have tremendous people in charge."

Read More: NASA and SpaceX to Make History in Two Weeks with First Space Mission Since 2011

Another interesting news shared by the US president

President Trump also mentioned military equipment that was being developed by the US military as a means of deterrence against aggression. He was proud to talk about it, which he dubbed the "super-duper missile."

President Trump was also proud that the super-duper missile which is 17 times faster will be used as a deterrent to other countries that were said to be developing their own missiles that were five or six times faster, leaving the United States confident in leading the arms race against the rest of the world.

The flag unveiling coincided with the presidential proclamation in which May 16 would be dubbed as Armed Forces Day. The flag will be displayed in the Oval Office alongside  other branches of the military. Space Force was officially established in 2019 but only now has its flag been launched.