Beginning next week, UV light units will be deployed to disinfect surfaces of subways in New York.

In a report by The Sun, scientists from Columbia University and officials of the Metropolitan Transportation Authority announced on Tuesday, May 19, the new cleaning approach. The ultraviolet technology has been found to "blind" and kill the coronavirus on train surfaces. 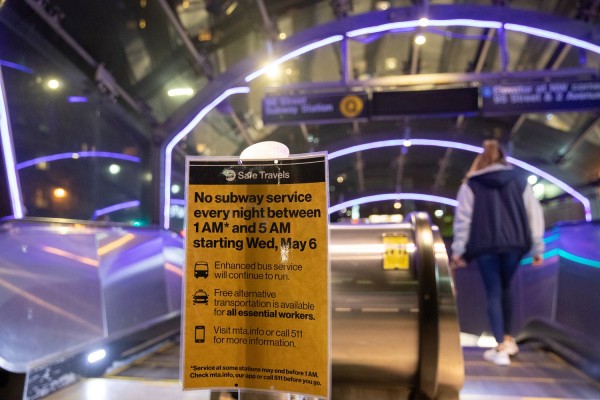 (Photo : REUTERS/Jeenah Moon)
Subway service information is posted outside subway station during the outbreak of the coronavirus disease (COVID-19) in New York City, New York, U.S., May 5, 2020. Picture taken May 5, 2020.

"The good news here is that UV is a proven and effective technology and it is 100% safe to humans after it is applied," said MTA Chair Pat Foye who was quick to say that this is a not cure-all measure. He said that there is still much work to do, "but this is a significant and promising new development."

MTA Chief Innovation Officer Mark Dowd expressed optimism over the project during a press conference at the Corona Maintenance Facility on Tuesday, May 19. "It's exciting for us to be able to do this pilot at the same time that Dr. Brenner's clinical research has shown that the UVs do kill--rather efficiently--the SARS-CoV-2 virus," he said.

After UV passengers have left the train, the UV-A light units flash every five seconds and are said to kill viruses. The MTA so far has acquired 158 devices with 230 lamps in total amounting to millions, although the exact cost is not revealed.

An NY1 report said these devices were bought from Colorado-based company Puro Lighting for more than $6,500 each. This would still be cheaper than the nightly shutdown of the New York subway to allow cleaning and disinfecting of the trains like how New York Gov. Andrew Cuomo announced earlier this month.

MTA CEO and Chairman Patrick Foye said this nightly process would be laborious and cost "hundreds of millions of dollars." In contrast, the UV light project is more cost-effective and requires an easy process of setting up the lamps and turning them on after the doors have closed. 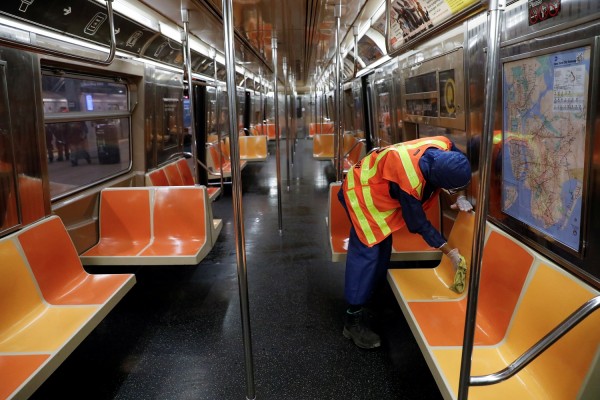 (Photo : REUTERS/Andrew Kelly)
A worker wipes down surfaces as the MTA Subway closed overnight for cleaning and disinfecting during the outbreak of the coronavirus disease (COVID-19) in the Brooklyn borough of New York City, U.S., May 7, 2020.

Can the UV kill the coronavirus?

Dan Arnold answers no, unless we are "frying people" under the sun, according to a BBC report.

Arnold works in UV Light Technology, a company providing disinfecting equipment to hospitals, pharmaceutical companies, and food manufacturers in the UK sees a peak in UV light sales amid the COVID-19 crisis.

There are three types of UV rays from the sun: UVA, UVB, and UVC. UVA takes up the majority of the ultraviolet radiation that reaches the Earth. It penetrates deep into the skin, causing up to 80% of skin aging like wrinkles and age spots.

The UVB can damage the DNA in the skin, causing sunburn and skin cancer. Both can be blocked out by sunblock lotions and creams.

The third type, UVC, consists of a shorter, more energetic wavelength of light, which can destroy genetic material in humans or viral particles. This dangerous ray is filtered out by ozone before it reaches human skin.

Arnold said UVC is "really nasty stuff" that humans should not be exposed with. "It can take hours to get sunburn from UVB, but with UVC it takes seconds," said Arnold. He also added that exposing eyes to the rays would be 10 times gritty as looking at the sun and even cause cataracts.

However, since scientists have discovered to harness UVC to kill microorganisms in 1878, artificially produced UVC has become a standard method of sterilization in hospitals, airplanes, offices, and even factories.

The director of the Center of Radiological Research at Columbia University has been studying UV light as a potential life-saving weapon against the virus.

Earlier, Brenner's team has already tested two types of coronaviruses and is currently testing SARS-CoV-2. "We saw we can kill 99% of the virus with a very low dose of far-UVC light," said Brenner adding that he believes the results will be similar to earlier ones.