A week since protests against police brutality began in the US, fake stories and posts meant to misinformation people have been circulating on Twitter and other online platforms.

Floyd who was accused of using a counterfeit $20 bill to buy cigarettes died after a Minneapolis police officer kneeled on his neck to pin him on the ground. The incident has since sparked nationwide protests against police brutality. 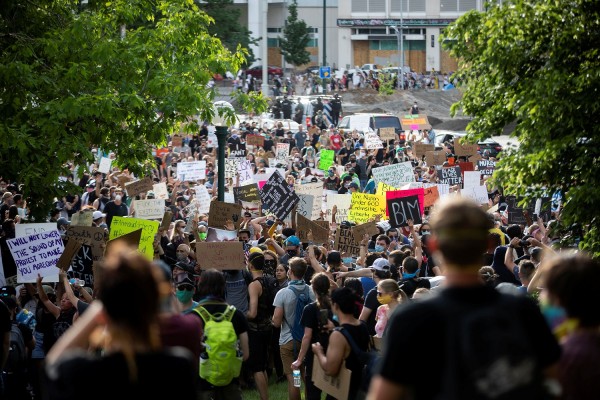 With the increasing tensions in these protests and flaring emotions from both sides, BuzzFeed News listed some of the fake stories and misleading posts that have been spreading online.

1. MSNBC aired a clip of the movie "World War Z" as a video of the protests. The man who created the video admitted it was meant to be a joke, but was surprised it received so much traction.

Well that escalated quickly. YES, that MSNBC clip was from World War Z, I even marked the video above the MSNBC logo "NOT REAL." I dramatically underestimated Twitter, many pointed it out, some claimed it was "real"-that was stupid of me. I apologize #Philly #WorldWarZ pic.twitter.com/8O52I5iEmn — Bad Scooter (@OfficialSlop) June 1, 2020

Twitter user Bad Scooter later apologized for his actions and deleted the earlier post. However, screenshots of it had already circulated online while "World War Z" trended on Twitter.

2. TikTok is not blocking the Black Lives Matter and George Floyd hashtags.

We are aware of an issue that is impacting the hashtag view counts displayed at the upload stage. This appears to affect words at random, including terms like #cat and #hello. Our team is investigating and working quickly to address the issue. — TikTokSupport (@TikTokSupport) May 29, 2020

The company has advised a bug has affected "words at random" and its team is quickly working to fix the issue.

We are aware of an issue that is impacting the hashtag view counts displayed at the upload stage. This appears to affect words at random, including terms like #cat and #hello. Our team is investigating and working quickly to address the issue. — TikTokSupport (@TikTokSupport) May 29, 2020

3. A Minnesota TV reporter did not play "fake gunshot sounds" during a peaceful protest as claimed in a viral video.

These “reports” sabotaging the protest making look like the protesters are armed by playing fake gunshot sounds pic.twitter.com/TT3SPArjS3 — e. (@_eden______) May 28, 2020

A Twitter post showed KSTP reporter Richard Reeve being confronted by protesters who accused him of disturbing the event with gunshot sounds. The station quickly explained what happened in a statement.

KSTP news director Kirk Varner said Reeve was filming the peaceful protest on his phone, but he wanted to confirm the gunshot sound he heard, so he played back the video and found an individual shooting into the air. Protesters approached Reeve as he was reviewing the footage.

The station's then released the footage shot by Reeve, which does show a man in the street firing several shots from a handgun. This was also supported by the video of Reeve speaking with protesters posted on Twitter. The video shows the reported lifted his phone and said, "This is what I saw."

Meanwhile, KSTP did not air the gunshots as they though "it ultimately did not contribute to our efforts to impartially portray the events that were happening in a rapidly developing situation."

4. A photo showing a McDonald's restaurant on fire is not from the Minnesota protests, but a branch in Pennsylvania that burned down in 2016. Although the account seems it came from a news organization, its account description states a parody account.

3. Do not get information from Breaking News twitter accounts. Many use breaking news situations to gain clout and followers. For example this one, which used an old photo of a McDonald's on fire to make it look like it was from Minneapolis. pic.twitter.com/hVtdDiCZYW — Jane Lytvynenko ‍️‍️‍️ (@JaneLytv) May 29, 2020

5. CNN Communications criticized a tweet from the Minnesota State Patrol about the media outfit's journalists who were arrested live on TV but were also immediately released.

In the course of clearing the streets and restoring order at Lake Street and Snelling Avenue, four people were arrested by State Patrol troopers, including three members of a CNN crew. The three were released once they were confirmed to be members of the media. — MN State Patrol (@MnDPS_MSP) May 29, 2020

The video of the arrest shows the reporters identifying themselves as CNN crew.

6. A video of a police officer was smashing the windows of an automotive business in Minnesota. The St. Paul Police Department has already denied the allegation while the suspect's identity remains unverified.

7. The train on this image was not stolen from a mall but is from the 2014 Ferguson protests known as the "peace train."

8. A tweet about a brother who went missing amid the protests garnered over 30,000 retweets. However, the owner of the Twitter account later admitted they do not even know who the man in the photo is.

IMPORTANT!! There is this tweet going around by @/lucidxyena in which they say their brother is missing. THIS IS NOT TRUE! DON'T RETWEET IT! Don't let it distract you from actual missing people pic.twitter.com/j7EamMVArp — sam | BLM (@rainbowdeku) May 29, 2020

The poster told BuzzFeed News that they did not expect it would get so many retweets. The account is now suspended due to violating Twitter rules.

9. The Minneapolis police officer who used a knee to hold down George Floyd, Derek Chauvin, was not in protective custody after receiving death threats as the tweet claims. He was charged with third-degree murder and manslaughter and currently detained.

The poster's account, Egyptian Weeknd has also been suspended.

10. A video of a supposed explosion inside a police precinct in Minneapolis was the explosion that happened in 2015 in the city of Tianjin in northern China.

Nice try. This video is actually of an explosion in China from 2015 and the person has just dubbed over audio from the riots last night in Minneapolis. Original unedited video below.https://t.co/ICs4O17OeB — Q Army STORM-trooper (@QArmyST) May 29, 2020

Before sharing any story, article, or social post, take the time to verify whether it is true or a parody. Check the user's account whether it was just recently created or try searching online to find another source.

Read also: Don't Steal iPhone on Stores; Apple Knows Where You Are