SpaceX has lifted and transferred the heavyweight Starship SuperHeavy, which will be the "world's most powerful launch vehicle," to another area in a stunning time-lapse video. It is indeed amazing to see how they carry a 30 ft diameter body that is much taller than the regular Starship at 223 feet.

The timelapse video was shared on Twitter by Florida-based spaceflight photographer John Krauss on Friday, Aug. 21, and it already has more than 330,000 views as of this writing. Krauss said on his tweet: "Time lapses from today's lift of Falcon 9 B1049.6. Great showcase of humans for scale. Lots of cool things to spot here!" He then tagged @SpaceX and @elonmusk on the post.

Time lapses from today’s lift of Falcon 9 B1049.6. Great showcase of humans for scale.

SpaceX CEO Elon Musk replied to Krauss and tweeted: "Starship/Super Heavy is ~10X bigger in mass & volume!" This made the 45-second video extra special as it made it look like lifting the spacecraft was easy. 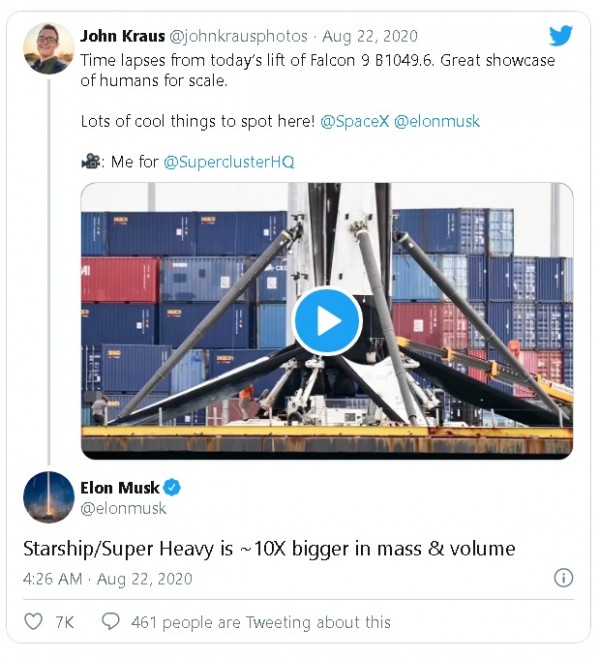 A Twitter user praised how Musk makes the build process so easy. "This really puts it in perspective. How easy Elon makes it all look!" she exclaimed.

Another Twitter user commented that he always forgets how huge the Falcon 9 B1049.6 and those spacecraft that falls from outer space, yet lands softly on a small ship in the ocean. "This is actually magical," he said.

Meanwhile, another user wondered about the gigantic size of the Falcon that made people look like ants. "Is Falcon being carried by still more huge crane?"

Read also: SpaceX Raised $1.9B in Biggest Funding Round Yet as Space Economy Expected to Be Worth $1 Trillion in 20 Years

Starship Superheavy: A massive display of humans for scale

Starship Super Heavy rocket booster will have its own tower-like vehicle assembly building (VAB). The booster is expected to measure 70 meters, which measures the same as the entire Falcon 9 or Falcon Heavy. Thus, Musk said the Superheavy VAB will be 81m tall, which is almost twice the height of Starship's VAB.

After the first successful pressure test of a full-scale Starship tank in April, SpaceX has effectively proven that seemingly simple and affordable materials and methods can build rocket structures suitable for orbital spaceflight. Thus, SpaceX is using the same methods and materials in building g Super Heavy, except for the booster's 31-engine thrust structure. 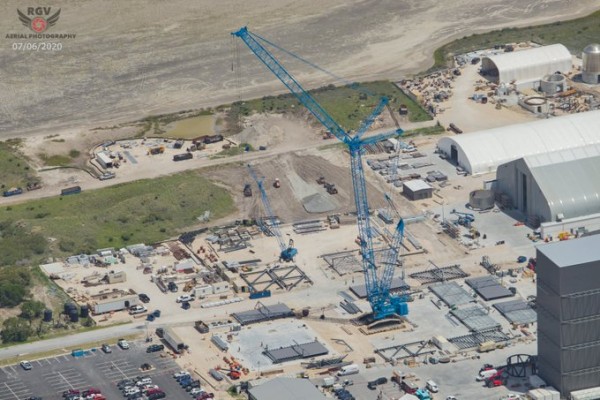 However, the booster's vast size will require a dedicated assembly facility because SpaceX's existing VAB is far too small for the Super Heavy. SpaceX's contractor has started assembling the VAB since Jan. 15, and the facility was fully completed on Mar. 18, just about two months after.

On July 7, the installation of Super Heavy VAB has begun. To build an 80-meter high bay, SpaceX had to rent a commensurately-sized crane for weeks to assemble and check out the facility gradually. The company will assemble about 32 prefab sections to complete the new VAB. This would create a high bay almost identical to the Starship VAB, except for the height.

Based on the construction schedule, SpaceX could begin producing its first Super Heavy booster prototypes by September or October. Once completed, the super-heavy booster will launch the ship to orbit in space.

Read also: ULA Beats SpaceX on US Space Force Contract; Who's the Man Behind it?

This is owned byTech Times.