Public health experts urge the public to have doubts over claims of pharmaceutical companies regarding the safety of COVID-19 vaccines they are developing.

In an interview with CNN's Wolf Blitzer on Sunday, September 13, Dr. Abdul El-Sayed, an epidemiologist and public health expert, said that the company that could produce an effective vaccine first would gain a lot of incentive. "To see a CEO get out ahead of the science here I think is something we should all take with a grain of salt," El-Sayed said.

In the same show, Anne Rimoin, an epidemiology professor at the UCLA Fielding School of Public Health also said that such schedule is "all speculation" at the moment. "I want to see the data. Show me the data," Rimoin said.

(Photo : REUTERS/Dado Ruvic/Illustration)
Small toy figures are seen in front of a Covid-19 Vaccine logo in this illustration taken, September 9, 2020.

This conversation happened after Pfizer CEO Albert Bourla said in an in interview earlier that day that they will know by the end of October whether their candidate vaccine will work. "Then, of course, it is (the) regulator's job to issue (a) license or not," Bourla said adding that he is not familiar how long it takes for the regulators to issue an approval.

However, the regulating vaccines agency, the US Food and Drug Administration, is currently after having several blunders since the start of the pandemic, so people may be scared or do not even pay attention to the news anymore.

"That's why you always tell the truth even if it doesn't win the news cycle," Brigham and Women's Hospital emergency physician Dr. Jeremy Faust told Blitzer.

In August, a Gallup survey stated that 1 out of 3 Americans will not get COVID-19 vaccine, even if it is free and FDA-approved. Worse, AstraZeneca's recent pause on human trials may boost people's doubts over the vaccine

In an interview with NPR, University of Illinois at Urbana-Champaign Psychology professor Dolores Albarracin said it is normal for people to have doubt on these new vaccines that are being developed. However, she said that aside from the 20% who are a part of anti-vaccine groups, 60% are afraid of the side effects while the 37% think these vaccines will not work. 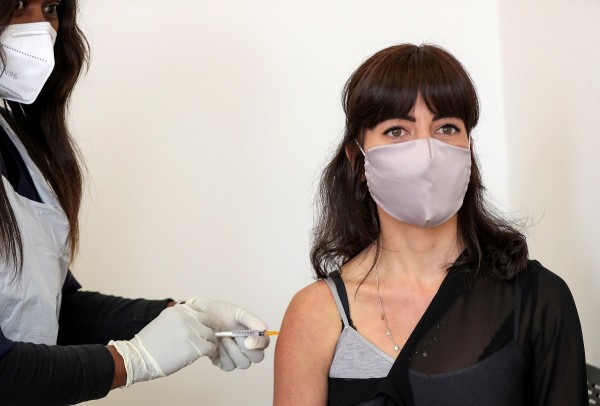 (Photo : REUTERS/Siphiwe Sibeko)
Robyn Porteous, a vaccine trials' volunteer, is injected with a vaccine as part of the country's human clinical trial for potential vaccines after being tested for the coronavirus disease (COVID-19), at the Wits RHI Shandukani Research Centre in Johannesburg, South Africa, August 27, 2020.

Albarracin also said that exposure to social media has great impact on people's decision whether or not they will get the vaccination in fear of the side effects. She highlighted the power of social media, particularly Twitter, in spreading misinformation.

The doctor said that among 3,000 participants they surveyed over the flu season, those who live in areas where vaccine misinformation is trending are likely to get the vaccine, except for those who have had real discussions with their family, physicians, or friends. "But otherwise, the misinformation they encounter regionally affects them," Albarracin noted.

To counter such misinformation, Dr. Albarracin suggested "to communicate a norm." This means telling the public that everybody like and must have it, which is different from what happened with wearing masks where there were a lot of contradictions that created more hesitations.

Meanwhile, the doctor also noted that we need to systematically correct misinformation through health education in public, work, and schools. This follows an explosion of misinformation, which WHO called as infodemic. "And if we don't eradicate it, it will make it very difficult to end the COVID-19 pandemic," Albarracin added.