While these groups may be smaller in number, their members are better linked and have stronger views against vaccines. 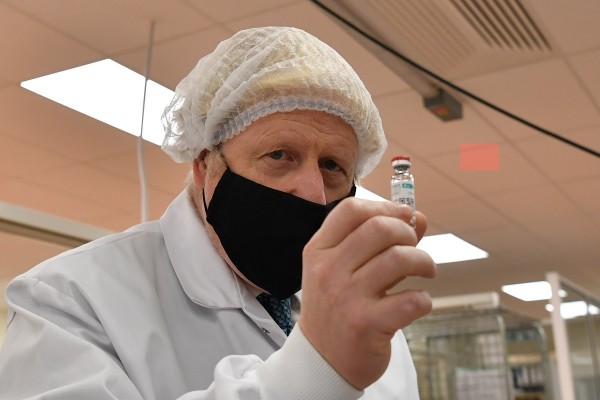 (Photo : Paul Ellis - WPA Pool/Getty Images)
WREXHAM, WALES - NOVEMBER 30: UK Prime Minister Boris Johnson, wearing a hair net and face covering, poses for a photograph with a vial as he views the last minute quality testing of the 'fill and finish' stage of the manufacturing process of COVID-19 vaccines, during his visit to Wockhardt's pharmaceutical manufacturing facility on November 30, 2020 in Wrexham, Wales. The UK government announced a deal in August with global pharmaceutical and biotechnology company Wockhardt, to increase capacity in a crucial part of the manufacturing process for Covid-19 vaccines. Britain has been Europe's worst-hit country during the pandemic, recording more than 57,000 deaths from some 1.6 million cases.

George Washington University physicist Neil Johnson who studies online extremism said the current scenarios that we are seeing with COVID are fruits of what is already in the system, which primed by the end of 2019.

Health officials have been warned already about the significance of public acceptance to ensure that there is enough number of people who will be immunized as hundreds of vaccines are being developed to prevent the further spread of coronavirus. While experts say there is no exact threshold for number of people required to receive the vaccines to prevent the spread of the virus, it is suggested to reach at 60% of the population.

However, the public has mixed reactions about the vaccines as a YouGov poll showed that only 42% of Americans agree to getting a shot once a COVID-19 vaccine becomes available.

According to a study published in journal Nature in May by a research team led by Johnson, public hesitation over the vaccine is caused by anti-vaccination movement, which publicized stronger as well as more emotive and diverse information. These groups spread their messages even outside their groups, so they could reach bigger audience, although online anti-vaccination groups are smaller than pro groups. 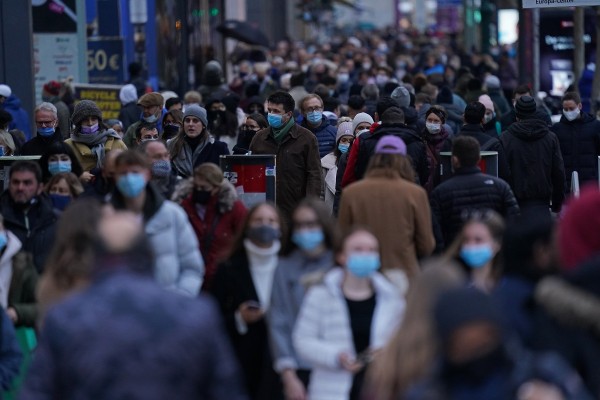 (Photo : Sean Gallup/Getty Images)
BERLIN GERMANY - NOVEMBER 28: Shoppers crowd Tauntzienstrasse shopping street on Black Friday weekend during the second wave of the coronavirus pandemic on November 28, 2020 in Berlin, Germany. Christmas season has begun muted in Germany as lockdown measures stay in place and are due to become even stricter in many regions in Germany beginning in December.

A follow up research shows that community members who actually considered or was "undecided" on getting vaccinated are now getting connected with anti-vaccination movement. These include members of non-vaccine-related groups such as parent school groups, pet lovers, foodies, and even yoga fans. "It's like a tumor growth," said Johnson as reported by NBC News.

Despite a certain delay, Facebook has finally taken numerous actions to mitigate the reach of anti-vaccine posts. However, the movement has continued to thrive amid the pandemic, which had huge influence on COVID-19 misinformation. The platform has also allowed anti-vaccination messages to evade its policies and reach a wider audience even those outside Facebook.

According to a statement sent via email, Facebook spokesperson Andrea Vallone wrote that the company works to serve people with accurate vaccine information while banning misleading posts.

Vallone also noted that they would continue to remove COVID-19 misinformation that could result in imminent harm. Facebook also directs people to its COVID information Center available in 189 countries.

Among the biggest affected by the Facebook ban earlier this month is the online anti-vaccination show "The HighWire," which has been removed for going against policies on "misinformation that could cause physical harm." This follows the removal of the show's YouTube channel back in July after being reported that host Del Bigtree has been downplaying the extent of the coronavirus pandemic and even urged his viewers to expose themselves intentionally to the virus.

According to a post on Informed Consent Action Network, Bigtree's nonprofit organization's Facebook page, The HighWire already had 360,500 followers, published over 500 videos and 190 weekly live shows with at least 30 million views when it was deleted.

Over the course of 190 weekly episodes, 'The HighWire with Del Bigtree' has accrued a viewership of more than 1.5... Posted by Informed Consent Action Network on Monday, November 23, 2020

The post also claimed that the show was different than traditional network news because it aims to give the viewers "the power of scientific, fact-based information." Meanwhile, a HighWire Instagram account with 199,000 followers remains active.

Meanwhile, researchers also noticed that anti-vaccine activists utilize the platform's livestreaming features to reach their audience while COVID-19 has been a favorite target by prominent anti-vaccine figures.

"The anti-vaccine movement recognized that [Covid-19] was an opportunity to create content, so when people were searching for it, they would find anti-vaccine content," Stanford Internet Observatory research manager Renee DiResta said. She added that these activists saw coronavirus as a huge opportunity to erode the public confidence towards the COVID vaccine as well as routine childhood immunizations.

However, moving beyond Facebook proved to have limited success. University of Washington's Center for an Informed Public postdoctoral scholar Kolina Koltai who studies the anti-vaccine movement explained that the audience of these groups may not know how to navigate those platforms.