The beans have been spilled following a leaked listing last November about Capcom's Retro Station Come Back. The arcade-style mini console seems reminiscent of the past and is now being unveiled officially as a console ready for release in the market. 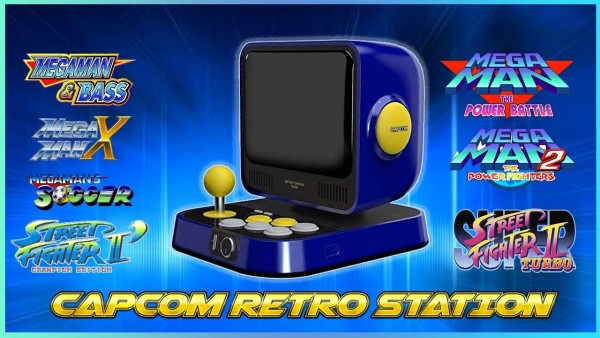 While other console developers are trying to make space-like modern-looking products, Retro Station seems to stick to its roots to bring a nostalgic vibe to gamers. According to Retro Station's official website, Japan residents can now preorder the console via their website. Very soon, it's available for Japan Amazon. According to Gamer Braves, what's also notable is that there is a predicted English release when the product is made available for other regions in the near future.

The best thing about it is that it has 10 preinstalled games available as you order the product. Here are the pre-installed games that come with the Capcom Retro Station that come from the franchised of "Mega Man" and "StreetFighter":

A sneak peak of Retro Station through their official website shows you that the console is a beautifully made arcade-game style product as it was showcased in different images and screenshots.

According to the website, the console has a customized joystick and buttons in perfect sizing, as well as an 8-inch 4:3 high-quality LCD display. Its 1024 x 768 resolution and 2 x 10 w Super Bass Speakers can give you optimal experience using an antique-like treasure from the past. It's especially designed with sound cavigty featuress. There is also an option to enjoy a built-in OST game with Mega Man sound system in the Retro Station console. The high-quality audio game experience and good graphics is what makes it unique and innovative.

There is also an option to output it in big screen HD video using an HDMI interface. It is also available in Two player games using an additional joystick. You need to utilize the Retro Station FightStick to be able to set it in dual player mode even with just one console. Another way to do it is to use the PVP Dongle in order to make a wireless connection between two Retro Station consoles.

The Retro Station is set for release in Japan for March 2021. The price is set for 21,780 Yen which is a good 210USD. It has sparked a debate online, and questions arise whether it's a gaming cutie worth buying. It is definitely a collector's item with high quality resolution and good sound quality. Plus an addition of 10 pre-installed games makes it even more alluring. High-tech consoles may be racing for sleek designs and modern aesthetics, but the Retro Station makes video game playing a nostalgic experience. Whether it is a collection worth buying is your call!