Pagarus Amphibious 'Superyacht': 82ft. Land and Sea Vehicle with Solar Panels Costs $30 Million! Specs and Everything You Need to Know!

Lazzarini Design's studio-render of the Pagarus Superyacht was unveiled and would feature an eight-passenger (with four crew) amphibious vehicle that would mainly be for the sea but also go on land and sand. It may seem like the Superyacht can do it all with its incredible specs and features that would be the all-around cruise ship to go on a nautical voyage. 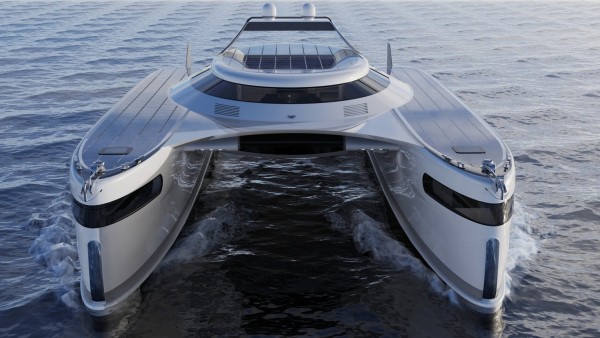 The Italians have done it again, now with a breathtaking design for a future vehicle that can go on both surfaces where humans usually stay on and venture. The Pagarus is a two-hull vehicle and is regarded as a "Superyacht" for its size, capacity, and make as it would be mainly for the world's waters and secondary to the land which can plow through sand and mud.

According to Daily Mail UK, the design studio regards this vehicle as the crustacean animal, crab, which is also named after the Latin name for the type of crab found in Italy, the "Crabmaran." The Pagarus is a six-bedroom futuristic Superyacht that has a limited capacity for passengers and crew alike but can store an off-road vehicle once its owners decide to dock.

This superyacht is one of the most expensive sea vehicles in the world, as projections and speculations of the Pagarus are around $30 million (converted from its original estimate of 22 million British Sterling Pounds). The Lazzarini Studio is known for its designs that reimagines different futuristic products that would soon be used by companies. 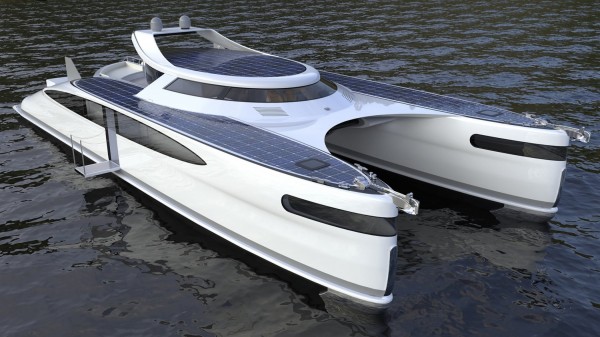 The extremely expensive Superyacht would indeed be a luxury vessel that is up for grabs, especially with its exclusive design and creation for only a limited number of people. The studio indeed created a prototype that can be used for different adventures that do not limit one to a single activity, combining both bests from the land and sea. 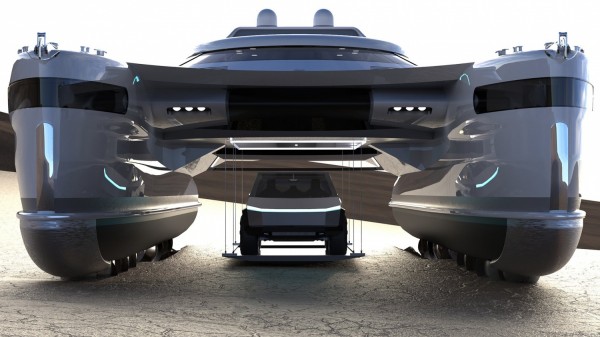 Another feature of the Pagarus is its dual-purpose elevator platform that can bring down or store equipment as massive as a full-sized vehicle (with the Tesla Cybertruck-looking vehicle featured). The same platform is also an enclosed dining area that is under the amphibious vehicle, enjoying a dinner that has a view of the sea or ocean. 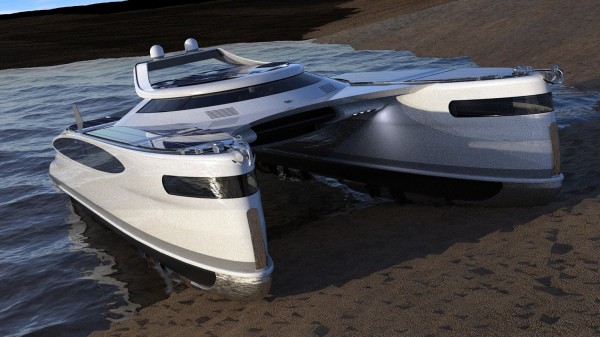 Since this is a project vehicle and a render of the company, there are limited specifications that are known of the Pagarus. However, the studio said that it can run up to 24 knots (28 miles per hour on land) and would be a diesel-powered yacht that can rely on rechargeable batteries.

The Pagarus' dual hull system is lined with solar panels that would take in the Sun's energy to recharge the batteries as it is used for traveling and the different electrical functions in the Superyacht. The amphibious Pagarus would be a hybrid yacht, which is a tech that is not used often with boats. 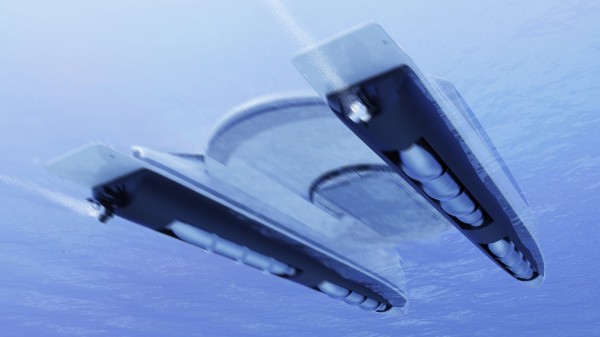 Under the Superyacht are weird-looking wheels that can be used on land which can bring it around sandy beachfront after a long day at sea.