Who is Hamzy? Mukbang Vlogger Fired by Chinese Agency Over Kimchi

Mukbang videos and vloggers have become increasingly popular over the years, with tons of content creators on various platforms, most especially Youtube. 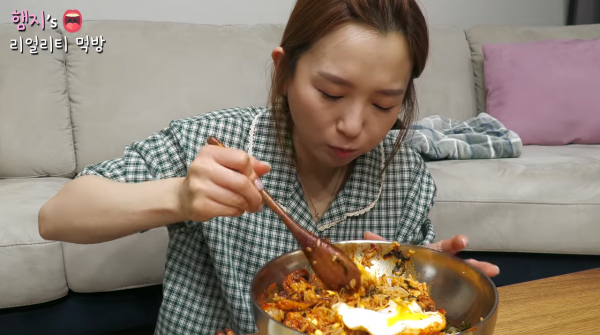 (Photo : Screengrab from Hamzy)
The issue started after Hamzy 'liked' a certain comment on one of her recent videos.

Among them is Hamzy, a Youtube personality with over 5 million subscribers, who is now in the middle of a controversy between South Korea, China, and the fermented cabbage side dish known as kimchi.

According to CGTN, it all started when Hamzy uploaded a video on her Youtube account where she was eating a "Super Spicy Octopus Bibimbap," which featured some fried eggs and kimchi.

In the comments section, one of Hamzy's followers commented: "It's really disappointing coz these days China says that Ssam is theirs too."

For those who are unaware, Ssam is a Korean word that means "wrapped" and refers to the way a piece of leaf, oftentimes lettuce, is wrapped around a piece of meat and a small portion of kimchi.

According to the report, Hamzy "liked" the comment, which infuriated her Chinese fans who took the action as an offense and left harsh comments on her videos, so Hamzy and her Chinese agency that handled the Youtuber's promotion in the mainland had no choice but to apologize to the fans.

Nevertheless, the harsh comments continued, especially when Hamzy posted a note on her Youtube page where she said that "liking" the comment did not mean anything.

"If Chinese subscribers feel offended and betrayed because I appeared to approve the comment by pressing the 'like' button, then I apologize," Hamzy wrote.

Due to the events that transpired, the Youtuber revealed that her Chinese agency canceled her contract, but despite everything, Hamzy remains firm in her belief that both Ssam and kimchi are traditional Korean food and that "does not change."

The South Korean mukbang vlogger also said that she would not call any traditional South Korean dish as Chinese food only to work in China and that it should be the same with Chinese people.

"They should not call a Chinese food a Korean food to work in Korea. That I am sure Chinese people can understand well," she concluded.

As of writing, Hamzy has over 5.3 million subscribers on Youtube.

As a mukbang vlogger, her content centers on eating various types of food, often with an ASMR aspect, wherein she focuses on making munching and slurping sounds, which some people find interesting and even relaxing.

Hamzy is also one of the biggest internet celebrities in South Korea.

Mukbang is a Korean word that translates to "eating broadcast," as per Today, wherein people such as Hamzy sit in front of the camera and eat various kinds of foods.

It is a popular trend back in South Korea, but as the years passed, the trend was picked up worldwide and many have begun creating their own mukbang channels, where they eat tons of food that may or may not be Korean of nature--and usually with ASMR.