"League of Legends: Wild Rift" will soon have one of the most popular game modes that is also available in its PC version. ARAM (All Random All Mid) offers players a one-lane match setup.

(Photo : Screenshot from Twitter post of @NeekoNi5)
'LoL: Wild Rift' to Have Better and More Fair ARAM Mode: Most OP Champs to Use

ARAM is ready very smooth and fun to play no crash or bugs. But the circle must be updated it must be howling abyys pic.twitter.com/aABbNRJ1Ex

This means that "League of Legends" fans will only focus on a single lane to destroy the enemy team's turrets and reach their nexus.

On the other hand, ARAM also prevents players to choose their hero since it will be quite unfair.

The good thing about ARAM is that "League of Legends" will provide them two heroes from which they can choose. Aside from this, they will also have dice that they can roll so that they can change the heroes offered to them.

However, you still need to remember that it will still be random picks. To give you more idea, here are other details of the upcoming "Wild Rift" ARAM mode.

According to App Trigger's latest report, Riot is expected to release ARAM mode in the mobile version of "League of Legends" in early June. Various rumors and speculations claimed that the game developer will retain this mode for about four weeks. 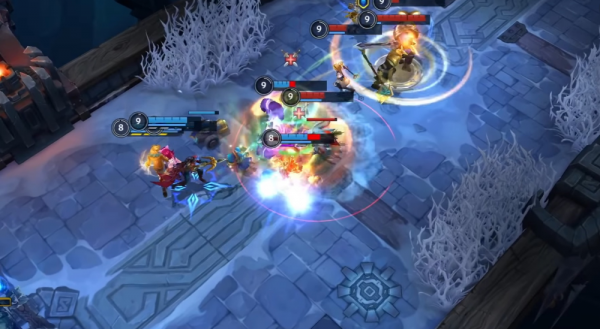 (Photo : Screenshot from Twitter post of @ApoloGamingTV2)
'LoL: Wild Rift' to Have Better and More Fair ARAM Mode: Most OP Champs to Use

Furthermore, Riot also announced that it will be releasing some enhancements and changes in the upcoming new ARAM mode. However, the game developer clarified that these tweaks will not change how "League of Legends: Wild Rift" ARAM is played by gamers.

Riot said that it will only make the popular ARAM mode more balanced and fair. The game developer added that it will be making some balances for various stealth heroes since they are quite OP in this mode.

Aside from this, Riot also confirmed that it is currently exploring the "Wild Rift" ecosystem to make ARAM more enjoyable. This means that it will check specific missions and achievements, ARAM-specific rewards, and other in-game content that can be adjusted to make the upcoming game mode more entertaining.

Since Riot will make some balances in stealth heroes, this means that you can no longer rely on them to win a match in ARAM. Although this is the case, you can still use some heroes that are specifically powerful when they are fighting many enemy champs.

Some of these heroes also have great CC or AOE, which is very tricky to counter in a one-lane match since there is very little space to play into.

PWR Down released the list of the most OP champs you can use in ARAM. Here are some of them:

For more news updates about "League of Legends: Wild Rift" and its upcoming innovations, always keep your tabs open here at TechTimes.