MiHoYo, the game developer behind the smash hit "Genshin Impact," is set to release its highly-anticipated romance detective game "Tears of Themis" on mobile devices - both Android and iOS - this Summer 2021. 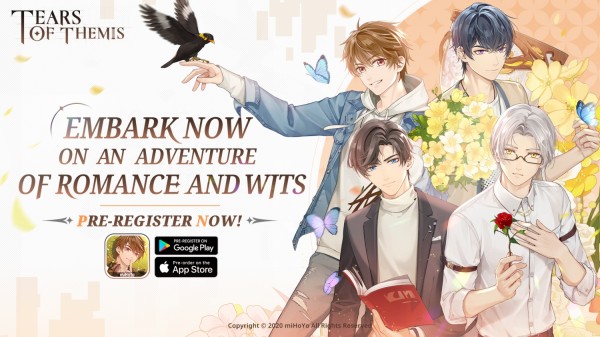 ALSO READ: MiHoYo, a Chinese Game Developer, Doubled its Sales Despite Pandemic Thanks to 'Genshin Impact'

The new game promises a new world filled with romance and suspense, chances and risks, all meant to test their luck and their wits. Additionally, miHoYo has opened the pre-registration for the game on the Tears of Themis Official Website. Shortly after the global interactive developer and publisher made the announcement, the site has already logged thousands of pre-registration applications.

Players who pre-register for Tears of Themis through the Google Play Store or the Apple App Store will receive exclusive rewards, including the chance to draw an SR card, which immediately unlocks a romantic interaction with one of the male leads once the game drops later this year. Additionally, there are other pre-registration activities on the site such as friend invites and survey rewards.

In a statement from miHoYo, once the pre-registration reaches 500,000, they will unlock a Draw x10 reward available once the game releases. Tears of Themis will be supporting multiple languages, including voice dubbing for the characters, for its global player base: including Japanese, Korean, English, and Chinese.

Embark on an Adventure of Romance and Wits

In the upcoming game from the Genshin Impact creators, players step into a world centered on the world of law, defending truth and justice while developing romantic relationships with four different male leads. Players assume the role of the new attorney at Themis Law Firm as they work from investigating to deafening clients in the courtroom. The game will allow players to investigate crime scenes, move around the city, gather evidence and testimonies, and interrogate suspects to help in their case. The ultimate battleground to uphold truth and justice is in the sacred walls of the courtroom.

Aside from working as the latest Themis Law Firm partner, players can also interact with its four male protagonists through a variety of activities such as voice and video calls, circumstantial interactions, and character-specific arcs unlocked with the right decisions in-game.

However, as you advance through the game, it becomes apparent that the cases handed to you and the leads of Tears of Themis are interconnected. A sinister plot moves to engulf Stellar City, putting you and the rest of the city in danger, while showing players that not everything is as it seems.

Founded in Shanghai, China back in 2012, miHoYo works based on its slogan: "Tech Otakus Save the World!" As a world leader in technology-driven content in the interactive entertainment industry, its portfolio spans video games, manga, web novels, and more.

'Genshin Impact' 1.4 Pre-Installation Function Release Date--How to Do it on PC, iOS, and Android

How to integrate crypto processing into your business in 3 steps, an overview