A viral TikTok video that made rounds on social media showed a wild animal that lives in a house in Cambodia. The exotic pet was seen wandering around the garden last week. The authorities rescued the 18-month lion immediately.

Last June 27, CBRE, a real estate company, said that the whole property could have an estimated value of $5,500 (S$7,410). The animal was situated in the Boeng Keng Kang district. Since the discovery of its existence, the 70kg animal was saved from harsh living conditions.

The TikTok clip which was spotted in April gave a signal for the NGO Wildlife Alliance rescuers to act. The animal reportedly had no canine teeth and claws since they were removed. 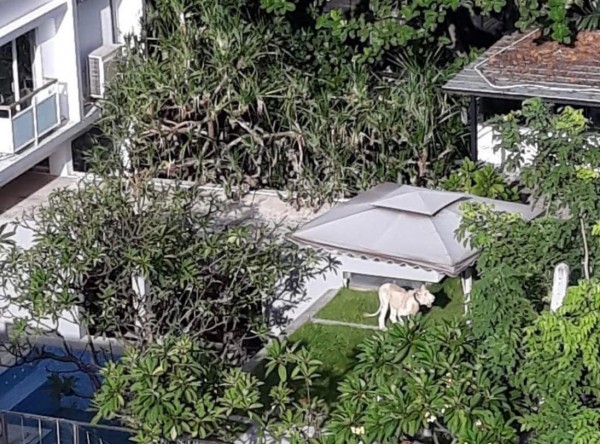 (Photo : @sjhiggins1973 via screenshot from Twitter)
A viral video on TikTok tells more about an exotic animal living in a garden. The authorities have been alarmed after knowing that a non-native species was existing in a Cambodian garden.

In a Twitter post shared by @sjhiggins1973 (Stephen Higgins) on June 26, the aerial shots toured the users to see the actual happening in the garden involving a stray, wild animal in St. 306 in Phnom Penh.

A day after the video went viral, the exotic pet was immediately rescued and taken to the Kandal province specifically in Phnom Tamao Wildlife Rescue Center.

In an interview with This Week In Asia, Keo Omaliss, the Forestry Administration Director-General said that they haven't encountered foreign lion species in the country before.

With the zoo shut, lions are now working from home as well (this is St 306 in central Phnom Penh) pic.twitter.com/cPSVmiSD83

Omaliss said that if they find another "rare species," they would quickly respond to the situation. In addition, the officials would continue to search for the possible wildlife that is being exploited in the artificial habitat. Once per month, the team would track down owners who have exotic animals in their houses.

What's the Problem Behind This?

According to South China Morning Post, Phnom Penh-based conservation biologist, Thomas Gray said that Cambodia has no clear law about banning the owners who have foreign animals in their areas like in the case of an African lion.

"We have to assume it's relatively uncommon, but I would also be surprised if it's the only inappropriate pet being kept in Phnom Penh or elsewhere in Cambodia," Gray said.

At the moment, the ban's scope only includes the African elephants and the illegal trade involving their tusks.

The proposed draft for the banning of animal trade has been idle for over five years since it was introduced to lawmakers. Those species under the Red List of the International Union for Conservation of Nature will be included in the ban.

Gray stated that such a campaign will inform everyone about protecting the animals. He added that he was certain that most officials from the Environment Ministry could not distinguish the protected species from the unprotected ones.

The Rise of 'Inappropriate' Pets

Surely, big animals are often the highlight of the news in the context of illegal possession of exotic wildlife. However, Gray said that the growing activity can also be seen in some animals like parrots and peacocks. Over the past years, pet shops have been appearing in Cambodia.

The worst part about this news is the fact that some of them are smuggled in other countries such as Indonesia. According to conservationists, the continuous pet trade might result in the quick extinction of the unusual animal species, Asia One reported.