Blizzard's Senior Vice President of Global HR, Jesse Meschuk, has made a voluntary exit and has left the company alongside President, J. Allen Brack. Meschuk was pressured by the massive backlash of former and current employees of the games publishing company.

These people blamed the controversy on the HR department, to which Meschuk leads.

A massive change is about to happen at Activision Blizzard, as its President, J. Allen Brack, has stepped down from his post at the company, which faced a lot of controversies. This follows T-Mobile's decision of foregoing their sponsorship over games like "Call of Duty" and "Overwatch." 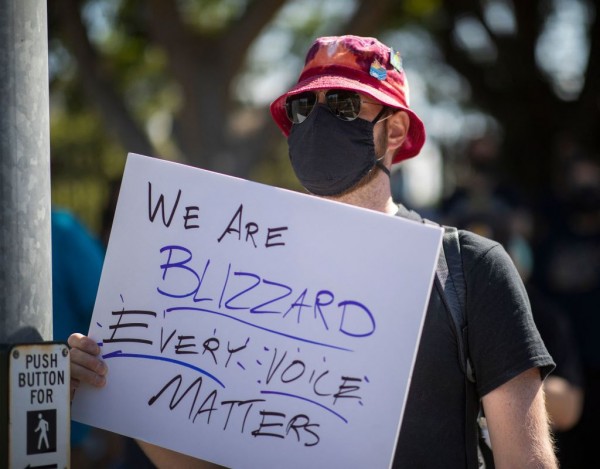 (Photo : DAVID MCNEW / AFP) (Photo by DAVID MCNEW/AFP via Getty Images)
Employees of the video game company, Activision Blizzard, hold a walkout and protest rally to denounce the companys response to a California Department of Fair Employment and Housing lawsuit and to call for changes in conditions for women and other marginalized groups, in Irvine, California, on July 28, 2021.

According to Axios, Blizzard's current and former employees have given out statements and blamed the HR department of the company for the lapses and issues it currently faces. It said that the lack of attention given by the department has led to what its employees have experienced, and that is the malpractices that compromise the work environment.

While some executives and employees deny this, it was confirmed that this issue is prevalent within the company as two executives have already left their posts. The first one was the Blizzard President, and the next was SVP of global HR, Jesse Maschuk has followed.

Meschuk has also deactivated his Twitter account, signifying that the executive wanted to get away from the controversies and issues, as far away as possible.

While there are no explanations regarding his departure, it only shows that there is a problem within Blizzard's internal management.

Read Also: 'Diablo 4' Character Creation Has More Features Than Ever Before, Check it Out

It is rare to see two executives break and leave the company in one day due to the pressure and experienced backlash brought by its protesting workforce.

Despite its rarity, Activision Blizzard has experienced this earlier today, when its President and SVP for global HR has vacated their positions amidst the issue.

Blizzard may be in full meltdown and panic, but has kept the fire under control through its management, as no statements coming from the company, admitting to their mistake were released. The allegations against them, workplace harassment, were massive dirt to throw on their name and something which heavily tarnishes their integrity.

Will Blizzard Have a Major Rework?

A massive rework on Blizzard's management is coming, and it should do it for the better to avoid any further walkouts from its employees and workforce. The only thing that these people want is to be able to work in peace and prosper within the company.

For now, Activision Blizzard should aspire to be a better place for its workers, as it extinguishes the flames of issues and controversies that surround them.