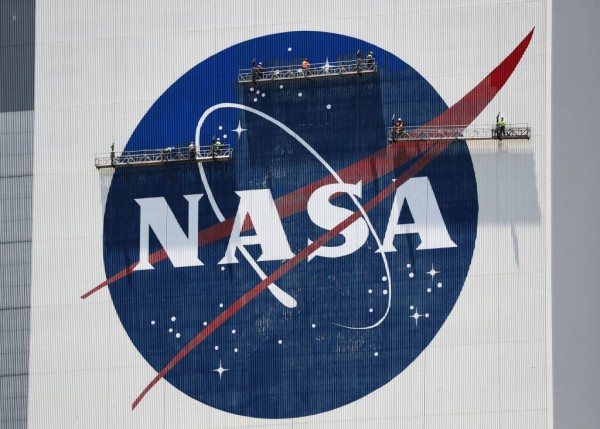 (Photo : by Joe Raedle/Getty Images)
CAPE CANAVERAL, FLORIDA - MAY 20: Workers freshen up the paint on the NASA logo on the Vehicle Assembly Building before the arrival of NASA astronauts Bob Behnken and Doug Hurley at the Kennedy Space Center on May 20, 2020 in Cape Canaveral, Florida. The astronauts are scheduled to arrive today for the May 27th flight of SpaceX’s Crew Dragon spacecraft.

The contracts that the National Aeronautics and Space Administration, or NASA, gave out to five space companies are worth a total of $146 million.

It turns out that NASA has decided to award a separate lunar lander contract to two firms, Blue Origin and Dynetics, that previously opposed the decision of the space agency to exclusively award the Human Landing System or HLS project to SpaceX.

It is worth noting that the latest set of contracts is different from the HLS contract that was solely awarded to the space firm of Elon Musk, SpaceX, last April.

Both Blue Origin and Dynetics, which are part of the latest contracts, protested the NASA HLS contract.

But it was only Blue Origin, the space firm of the Amazon founder, Jeff Bezos, that went on to bring NASA to the federal court due to the HLS contract, which is currently still ongoing.

Due to the lawsuit that Blue Origin filed, the lunar lander project between NASA and SpaceX has been delayed until November.

To be precise, the contract with Blue Origin is to the tune of $26.5 million, while Lockheed Martin was awarded a whopping $35.2 million.

Northrop Grumman was also granted a $34.8 million contract, according to Yahoo News.

Meanwhile, SpaceX got the lowest contract price of $9.4 million. On the other hand, Dynetics was able to grab the most expensive award of $35.2 million.

However, two of the companies that likewise submitted their proposals to NASA did not receive any contracts from the space agency's Artemis program, such as Cook & Chevalier Enterprises and Nebula Starlines.

As per TechCrunch, the contracts that NASA awarded are under its NextSTEP-2 or Next Space Technologies for Exploration Partnerships.

The objective of the contracts awarded to five firms is to specifically "engage with potential commercial partners for concept studies, sustaining HLS concept of operations, development, and risk reduction activities."

As such, SpaceX, Blue Origin, and the other space exploration firms will work with NASA to develop the design concept of the lunar lander that will be used to land astronauts on the moon again after 50 years.

Not just that, the said firms will also look into the performance and safety factors of the moon lander.

The Artemis program of the United States space agency is not limited to bringing humans back to the moon 50 years after the Apollo mission.

NASA also seeks to make a travel routine to the moon in the future under the program that was established in 2020. Not to mention that the space agency further plans to travel humans to other planets like Mars.