Mario and Sonic at the Olympic Games Tokyo 2020 is a Sega and Nintendo crossover, a part of a series that first started on Wii in 2007, and that is now available on Switch, which includes various events that are fun to play, with or without friends.

According to Kotaku, fans of the Olympics and Sega-and-Nintendo crossover series can enjoy up to 30 summer sports and mini-games that are available in this title, and that they get to be either Sonic the Hedgehog, Mario, or any character from their own franchises.

However, these sorts of titles are best played with friends, and the multiplayer events allow you to play and compete with your friends who are Mario and Sonic at the Olympic Games Tokyo 2020 fans, too.

The game not only boasts the well-loved characters from two of the most iconic franchises of all time but that it also features infamous Tokyo landmarks, which adds more to its charm.

Some of the party games involve hitting the gym, the track, and the water, while sports events include racing, dressage, surfing, and skateboarding, as well as "Dream" events where you hop on a hoverboard and go through a downhill course filled with obstacles. 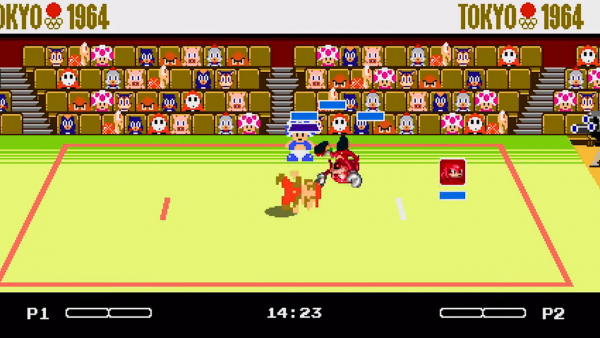 (Photo : Screengrab from Nintendo)
The 2D events are part of the game's single-player story mode.

Perhaps one of the most memorable parts of the Mario and Sonic at the Olympic Games Tokyo 2020 game is the retro 2D sports events that will send you back in time, and there are 10 of these included in the title.

These 2D events are part of the game's single-player story mode that makes Sonic and Mario jump back-and-forth the real-world 2020 Tokyo Olympics and the 1964 Tokyo Olympics as they get trapped inside a handheld system by Eggman and Bowser, while Luigi and the others try to rescue their friends from the game.

The only way out of the game is to get gold medals, and the only way to earn them is to play sports events.

The Sega and Nintendo crossover series is well loved by its fans, but unfortunately, Mario and Sonic at the Olympic Games Tokyo 2020 is in the middle of the pack according to some reviews, mainly due to availability of the sports games on Switch, as well as the brilliance of its predecessors.

Metro has also given it a score of 5 out of 10 due to its collection of events that are already available in the past series.