'Call of Duty: Modern Warfare' Battle Pass is Now Live, Plus Here's What the Latest Patch Brought to the Game

The largest update for Call of Duty: Modern Warfare so far is now live, meaning Season One is officially here, as well as the battle pass that comes along with it and all its inclusions. Here are what has changed after patch 1.10. 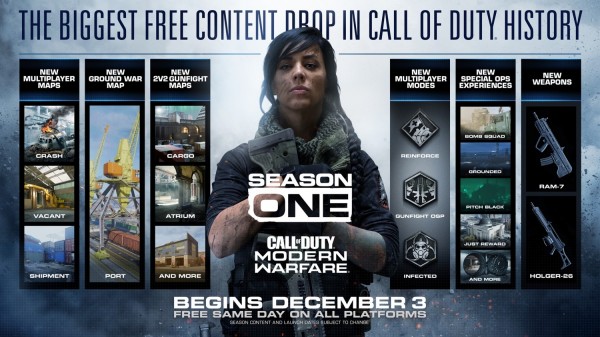 (Photo : Call of Duty/Facebook)
Here are the contents available for Call of Duty: Modern Warfare.

The Battle Pass for Modern Warfare is different from Black Ops 4, where there are two separate passes: one free and one paid.

Based on a report by Newsweek, Modern Warfare players will work from a single pass, and that 20 tiers will be for free, and if the players wanted to unlock the remaining 80 tiers, they would have to pay $10 or 1,000 CoD points.

There is also a choice to pay $1.50 per tier, another with a bundle that will unlock the first 20 tiers instantly, as well as purchasing everything at once for $150.

Two weapons are available for both the free and premium Battle Pass, the Ram-7, and the Holger-26, which should be unlocked at Tier 31.

Meanwhile, the premium pass will have everything included in the free pass and more, including three watches, 18 weapon blueprints, and 11 double XP tokens, among others.

When it comes to the update, two of the maps, Cargo and Atrium, are now available in the Gunfight mode, while the Port map will be available in Ground War.

The Crash is making a return to Call of Duty: Modern Warfare, with a new design to make the map look and feel more realistic, alongside changes to the narrative, wherein the Allegiance and Coalition are converging in the Al Qatala compound found in the center of the map.

Apparently, Shipment and Vacant will be returning sometime during the season.

The patch has also included a few modes, including Reinforce, Infected, and Gunfight OSP modes, but removed 2v2 Gunfight Tournament, Gun Game, as well as Shoot House 24/7 from its playlist.

Players can expect more modes coming as the season progresses.

Special Ops missions Strongbox and Just Reward, along with three Classic Special Operations are also live now, each with their own goals and narratives, after the first huge update of Call of Duty: Modern Warfare.

Additionally, the patch has launched Modern Warfare's very own microtransaction store that allows gamers to purchase in-game bonuses in exchange for real-world money.

According to GameSpot, there are a few different things fans can buy in the store such as Operator charms, stickers, skins, finishing moves, and Blueprints—all that are available for a limited time only.

Patch 1.10 has done a lot more, such as nerfed the .357: Buckshot, as well as fixed several bugs to make gameplay experience smoother for the players.

All the changes are available on the patch notes published by Activision.

Call of Duty: Modern Warfare is available on PS4, Xbox One, and PC.