As researchers rush to stem the growing tide of the infected and look for the cure of the virus, the internet is ablaze with fake news going viral, the one regarding a decade old map is just one story. 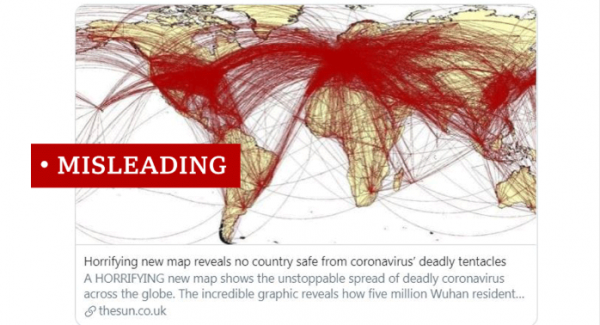 This decade-old map that depicts global air travel was incorrectly misused by news websites all over the globe, leading to headlines that are like "no country is safe from coronavirus" and "Terrifying map reveals how thousands of Wuhan travelers could have spread coronavirus to 400 cities worldwide".

How did it begin

The World Population Project, at the University of Southampton, published research predicting where people from Wuhan, the place where the virus was first found, had traveled within the two weeks before the city went into quarantine lockdown to prevent the outbreak.

Scientists looked at the flow of air travel and mobile phone data of Wuhan residents from the previous years. The study brought in the estimation of nearly 60,000 people might have traveled to almost 400 cities worldwide before Wuhan authorities had imposed the travel ban.

The researchers, however, posted a series of messages about their work on Twitter, including the same map in question being talked about today. They did not explain the map was not part of the study, and this prompted and since then has been deleted.

The problem is as the university's press has stated to BBC, "somehow, from this, an incorrect story has spiraled".

What is the Fake News About

The fake news is talking about the spread of the global outbreak that is the coronavirus or COVID-19.

The red lines, so say the presenter, represent five million Wuhan residents who have fled the city. In reality, it is just the flight routes around the world.

Read Also: China Tech Giants Unite To Roll Out Color-Based QR Codes to Fight COVID-19: How Does It Work?

The five million Wuhan residents stated it was from a very different source. This was from the mayor of Wuhan gave the number when talking about the total leaving the city ahead of the Lunar New Year holiday, while most of the residents stayed within China.

News websites like 7News have now removed the online article. However, it still lingers on many other news outlets with the same story but different languages, which are still incorrect.

To add, people still spread false information due to fear. Like one host last week about a guest on a radio show told Glenn Beck United Kingdom researchers had tracked the mobile phones of 60,000 peoples that had left China and indicated the world map. He said, "The chart is frightening."

The problem is that fake news spread faster than legitimate news. It feeds on people's fears and makes them think the worst than be well educated about the conversation. News websites should be responsible for delivering news that is concrete and with facts rather than sources.

ⓒ 2021 TECHTIMES.com All rights reserved. Do not reproduce without permission.
Tags: Coronavirus Fake news
Most Popular