Jobs interviews are notorious at accepting only the best of the best, there are a lot of factors that go through a recruiter's head, and clothes are one of them. Is there really a bias when to it all, however? Let's find out.

A particular post in LinkedIn has garnered a huge hit due to its effect on the person's career. A person named John was due for an interview in Amazon but had no appropriate clothes to wear during the interview. Thanks to the help of the Working Wardrobe project that lent him clothes to wear for the interview, he was able to get the job, and eight months later, he is still working in the same company.

The viral post in question has already hit about 56 thousand reactions in LinkedIn and has almost 1,700 comments.

What's so important about how you dress

This raises a question really of how companies choose from the pool of applicants based on some biases. Will they hire a person who wears casually despite their stellar resume and performance or someone who i dressed in smart casual and is fresh out of school? A recent study shows the biases of how corporate ladders work.

Based on a survey of 500 hiring working professionals, representing all walks of life and genders, were asked to rate the top three traits they look for or perceive when shown images of job applicants of different ages, races, and or body types.

This screenshot is taken directly from the post and shows what the before and transformation of John for his interview: 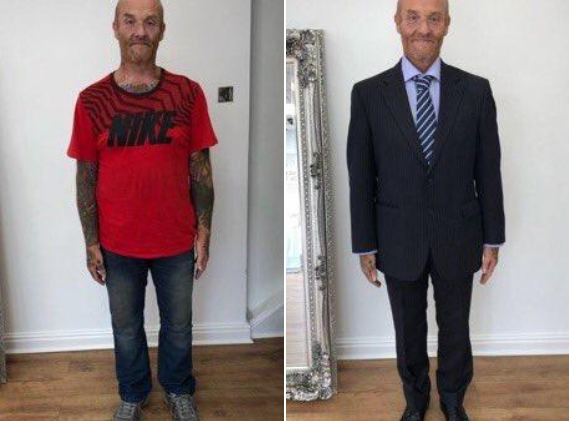 What was the survey about

Fairygodboss was the one who initiated the survey of about 50.2% female and 49.8% of males. This survey showed photos to the hiring managers of varying ages and races with different body shapes, looks, demeanors, and of course, clothing. From the list, they were asked to list 11 adjectives, and these being are:

What were the discoveries

The survey has shown that the hiring managers most frequently selected as most likely to be hired apparently was a young, think, Caucasian brunette.

Now thinking about the problem of these hiring practices when it comes to biases is first to recognize the root of the problem and address it and incorporate ways to overcome them. Hiring managers, for instance, need to ask themselves, if they are not sure if someone is leader material or not, is it because the person looks a certain way or really because the candidate doesn't have any good leadership qualities.

What affects the decisions

There are about four things that affect the decisions of the recruiters, which were identified in the study. And those are weight, demeanor, age, and race.

On the weight category, about 15.6% of hiring manager has stated that they would hire an overweight person, 20% described them as lazy, and 21% said they are unprofessional, only 18% said they could possess the leadership role. So if you think you're overweight, be prepared to highlight your work ethic, professionalism, and leadership potential.

When it comes to demeanor, 15% of the manager would consider hiring a woman who frowns often. Worse when a female candidate who doesn't smile at all is least likely to get the job. If you aren't a positive natural bunny, be ready to do some research on what the company's culture is to have an added boost to know what makes them tick.

Age is interesting. Older people are most likely perceived to have positive traits and characteristics. The contrast is that there are also people who don't hire people who look old. Only 29.2% of recruiters said they would hire older candidates.

The race of an individual is also a factor of bias. Recruiters would often hire people of the same race as shown in the survey that African American respondents, about 67.7% would hire their own. Asians rate 61.5% that are shown to have the most likely to get hired. So if you were to go to a company and get an interview for a job, if you do happen to be the same race as your recruiter, that's already an automatic win, and you just need to ace the rest.

Now, if the biases are addressed or not, the important factor should really be the leadership skills of the individual regardless of personal biases.

Read Also: Shocking! A New Way to Charge your Phone Without Charging it Again is Now Possible!

ⓒ 2021 TECHTIMES.com All rights reserved. Do not reproduce without permission.
Tags: Job Hunting Biases
Most Popular