Battlefield 5's Patch Notes 1.33 had just gone live on PS4, and it was announced by DICE. They have added tank customization, a brand new audio system, and a rebalance for all weapons. 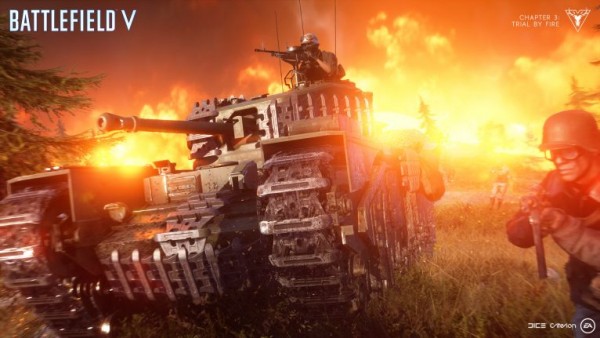 Read Also: Walk Down Memory Lane! League of Legends Old Arcade Game Mode 'One For All' to Make a Comeback Along with Patch 10.6

They have now tweaked the damage values on the Bazooka and Panzerfaust. The Bazooka can now only deal slightly less damage when it comes to poor angle hits and can now one-hit-kill planes of the enemy. The Panzerfaust, however, does a little bit more when at poor angles. They also improved its third-person reload animation. The Lunge mine can now no longer cause an unexpected second explosion and now properly destroys some stationary weapons. Some fixes have also been made, like an issue with the bolt action animation, LOD issue with M19, smoke effects are not properly blocking enemy icons, KI-147 and V1 rockets that sometimes do not have any sound on the engines, and some other bug fixes that can be seen on the full list of patch notes.

Players can no longer disable the universal carrier, and it as no self-repair function. 10MM AA no longer explodes when hitched, Sherman tank can no longer get decals from the other team. The corsair F4U-1C back wheel can no longer clip to the tail rudder. They improved tank turret syncing that is aiming between zoomed and non-zoomed. The update also increased the damage of AT mines and the ammo count of shotgun type rounds for some tanks, not including AA tanks.

To make it more robust, the death flow has also been refactored to make it easier for the developers to debug should there be any other issues. They have improved Norman Kingley's downstate. Japanese soldier audio can no longer ask for V1 instead of the K1-147. This patch has also fixed some bugs that could cause some ragdolls to hang from their hips and fixed an issue wherein soldiers that are throwing Kunai knife will result in the third person perspective floating of the Katana.

On Solomon Island, they have removed a couple of things like the supply station in the mountain, the invisible collision at the beach, and duplicates of the static track on top of another truck. They also have fixed some issues like players could get stuck inside the crashed plane, an exploit that can allow some players to hide in a mountain wall and multiple issues that would allow players to go to the unintended areas. Other maps, including Wake Island, have been updated as well.

This update is now live. For more details on the update, check out the full patch notes list here.