Here is Everything You Need to Know Before Downloading Activision's Call of Duty: Warzone

After a handful of leaks here and there, Call of Duty's: Warzone Free-to-Play Battle Royale game is finally dropping on all platforms. 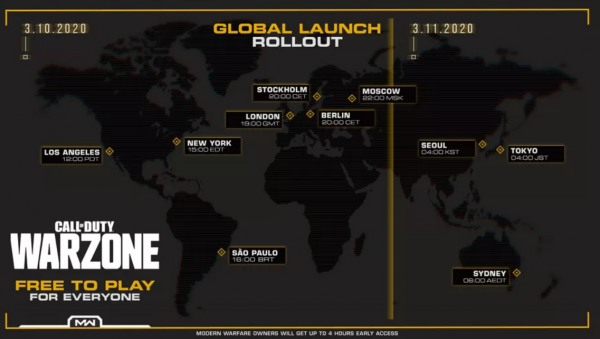 Read Also: Activision's Call of Duty Gets an Unexpected Game within a Game! Pokemon-like Tomogunchi is Here!

Like any other BR game modes, players can group up in trios with their friends and fight to be the last squad alive while trying to survive a deadly gas with up to 150 players.

Warzone takes place in Verdansk, which is a pretty big map with at least 300 points of interest. There are also vehicles to be used if players need to get somewhere fast, especially when escaping the gas. There will be five different kinds of vehicles for all players to choose from, namely, ATVs, SUVs, Tactical Rovers, Helicopters, and Cargo Trucks.

Other in-game mechanics include The Gulag in which when a player gets eliminated, they will be considered as prisoners of Warzone and will be taken into the Gulag. There they will fight to the death on a 1v1 game to earn the reward of being revived of redeployed. If you fail, your teammates can always bring you back in exchange for in-game currency.

Contracts can be used in-game, and when completed, you and your teammate will earn cash in-match, some loot, and special rewards like the ability to see where the next circle will be before it happens, much like Apex Legend's Pathfinder.

When does Warzone drop, and what time would it be?

There will be two different release dates and times for Call of Duty: Warzone. If you already own Call of Duty: Modern Warfare, your release time would be 11 a.m. EDT on Tuesday, Mar. 10, but if you don't, you can expect download at 3 p.m. on the same day.

For other timezones, Activision has provided players with a map.

Downloading for existing Modern Warfare owners is a lot easier

It will definitely be a simple download once you already the game. It will be on the "Classified" panel on the in-game menu, and the download size will be between 18GB - 22GB of additional data. If you are a new player and you don't have Modern Warfare, you'll need at least 83-101 GB of free space for Warzone, and downloading it isn't that hard as well. You need to go to your respective platform stores and search Call of Duty: Warzone and start downloading.

According to game developer Activision, while you wait for your download to finish, you can play Modern Warfare's Gunfight Mode offline after the first 20GB, which will let you face against bots.

Everyone has been excited to see Warzone finally drop after all the leaks these past few months, which got everyone excited. Though players can agree that Call of Duty: Warzone is the worst kept secret game ever.

Read Also: Tweet Spotted with 03/03: Could This Be the Launch of Call of Duty's Very own Battle Royal mode, Warzone?