[VIRAL] Thousands of Pink Jellyfish Swarm a Beach in The Philippines; Monkeys in Thailand Brawl Over Food

Ever since the coronavirus pandemic started, people all over the world have been forced to retreat in their homes, which have led to the abandonment of famous tourist spot destinations. These include locations where animals are mostly sought out by tourists. Now, most of them have appeared out of nowhere. 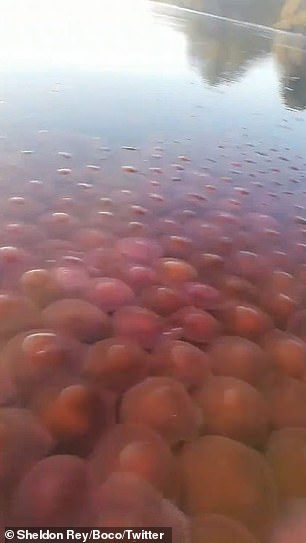 Thousands of Jellyfish raid beaches in the Philippines

Palawan is known for its beautiful and serene beaches in the Philippines. Though now, it has been deserted and abandoned due to the coronavirus pandemic, which has now enabled nature to blossom along the coastline.

Due to human activity on land, which caused them to be unseen for years, biologists have witnessed thousands and thousands of pink jellyfish on a beach in Palawan.

These creatures, nicknamed 'sea tomato,' have appeared since they now feel safe and unthreatened in their natural habitat. Sea experts have said that these jellyfish were so far deep under the ocean that was caused by the presence of the tourists above.

This was seen by a Ph.D. candidate in marine biology at Griffith University, named Sheldon Rey Boco. According to him, as told by Daily Mail, more research and study still needs to be done so they can explain and understand this anomaly more.

Reports from Newsweek have said that the video below was taken on Mar. 23 on Boco, El Nido, Palawan, specifically the Corong Corong beach.

Boco said on this Tweet along with the video that "Jellyfish certainly are not affected by #COVID19 restrictions." He also told Manila Bulletin that "These hundreds or thousands of medusae are probably present in late January or February, but because of wind, current and tidal conditions, they only seem to appear during March in Palawan."

Boco added that the atmosphere, current, water velocity. And geological features of the bay can also influence the appearance of medusae and their blooms.

Another incident where animals appear out of nowhere is this unusual monkey war that happened in Thailand's historic city, Lopburi.

According to locals in the area, this is likely to be caused bu the dip in tourism caused by the pandemic. Not a lot of tourists have been around, which means no food for the monkeys. Not to mention that markets have closed down as well.

This has caused the monkeys to go around fighting each other while looking for food. What were they brawling about? One cup of yogurt. The fight caused traffic to halt for at least 10 minutes before they went to a different area.

These crab-eating Macaques were so used to being fed by human food by tourists that go around the temple every day. They even have a Monkey Buffet Festival annually where tourists make towers and towers of fruits and vegetables for the monkeys to feed on.

Later that day, residents had started to give out food offerings for the monkeys in the temple.

Read Also: A Massive Black Hole 50,000 Times the Mass of the Sun Just Ripped Apart a Star in a Distant Galaxy