Square Enix's Final Fantasy VII Remake is now here after a long time of waiting. The game has 40 hours of gameplay, but fans can expect more episodes are coming soon, so for now, FFVII Remake players can finish the main storyline or enjoy a few side quests. 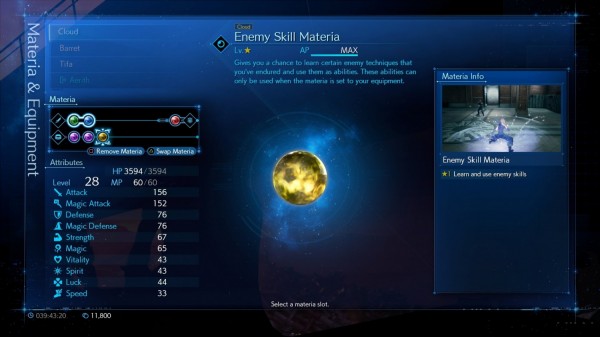 (Photo : Final Fantasy VII Remake/Facebook)
There are different types of Materia throughout the game.

Nevertheless, the game has a few essential objects that any Final Fantasy VII fan could miss, especially for those who are focusing on the main storyline--and the most important but missable items are Materia.

For any old FFVII fans, they would already know what a Materia is and why it's incredibly essential for the game. For those who are new, it's those colorful orbs that can be equipped to increase the stats of basic skills and allows them to learn new skills, spells, and even summons.

According to SegmentNext, there are five categories of Materia based on their colors, and each category provides a different benefit.

There is the green, red, purple, yellow, and blue Materia, with specific types of Materia under each category.

For example, the green Materia includes Magic Materia, orbs that will allow characters to learn elemental spells that can be useful against different types of enemies. Under this category are the fire, ice, wind, lightning, and healing Materia.

Nevertheless, there are a few other types of Materia that can be found all over Midgar, but some of them can be easily missed--and most of the time, there is no turning back, so it's best to find every item that can be found before moving on to another chapter.

Here is the Materia that could be easily missed throughout your Final Fantasy VII Remake journey and where to find them, courtesy of Gamespot.

The HP Up Materia is a purple orb that should be beside the white van on Midgar Sector 1, which can be found in Chapter 2. The van is near the checkpoint guarded by soldiers.

The first time you see it, Cloud won't be able to grab the orb unless triggering the cutscene and getting attacked by the Shinra Security Officers. However, many would tend to move forward and forget about the little orb, so before moving in, go back to the checkpoint and grab the little orb.

The Deadly Dodge Materia is another purple orb that is essential for early combats, which allows Cloud to dodge enemies with an area damage attack.

Although you can buy the Materia in FFVII Chapter 3, there's a free one on Chapter 2--and the earlier you get a Deadly Dodge Materia, the better. From the checkpoint from the HP Up Materia, continue further south and fight three more soldiers. After that, check beside the car for the Materia.

The Cleansing Materia is a great Materia to have as it heals poison status effect, plus you can use Esuna later on when you've gained enough AP from using it, which heals all status conditions.

It can be acquired by finishing the Rat Problem side quest in Chapter 3.

The Revival Materia is handy when you don't stack up on Phoenix Downs or if you don't have enough gils to stock up. As the name suggests, it brings back dead party members.

It can be found after defeating the Chapter 4 boss. Go back to the Sector 7 Plate Edge, where the Materia is lying on the ground just before the first right turn. 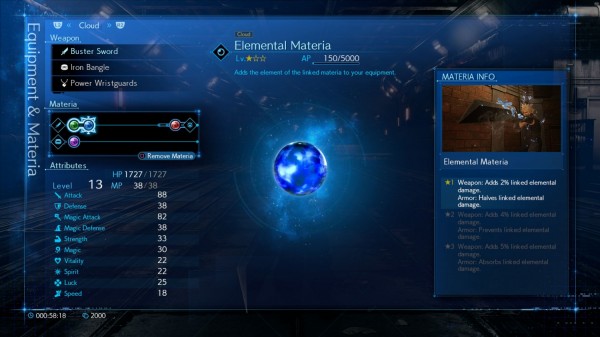 MP Up and Elemental Materia

The MP Up Materia is available in the market, but it's rather expensive, and there's a free one that you can grab.

It can be found in Chapter 6, on the second gondola and back to the area where you climbed down from Sunlamp 2. Find the ladder down by going around the cargo, then go down and fight off two Queen Grashtrikes. Use the control panel so you can lower the walkway, but don't align it with the gate, and instead, keep on lowering it until the MP Up Materia is low enough for you to grab.

There's another missable Materia in the area.

After getting the MP Up Materia, put the walkway back in place, then check the far end of the next platform for the Elemental Materia.

The best way to get additional Materia is to always check on Chadley, the kid in the Sector 7 Slums, who will give you the Assess Materia, which is vital in easing up combats.