Doctors are now saying that bruising and lesions on your feet can be a sign of the novel coronavirus. Numerous cases in Spain, Italy, and France have emerged with these symptoms that have mostly appeared in young adults and children.

The first case was a 13-year-old boy

Patients with symptoms such as having purple chickenpox-like marks on their toes have tested positive for COVID-19. Cases like these have been reported in different countries as the virus continues to spread all over the world.

One of the first ones was a 13-year-old boy whose lesions on his foot, which was first thought to be caused by a spider bite, eventually erupted and crusted over. The boy then developed itching on his foot, a headache, muscle pain and a fever.

Medical experts warn the public that this mysterious and peculiar symptom has only been observed in teenagers, young adults, and children. However, skin symptoms that are possibly caused by the virus are only seen in one in five patients in hospitals in Italy.

What is currently known is that the SARS-CoV-2 virus exhibits symptoms in the form of a cough, fever, and difficulty breathing. However, recent studies have also raised other symptoms such as the loss of smell and taste, testicular pain, skin marks and diarrhea. Numerous people who contract COVID-19 have been also experiencing dizziness and headaches. 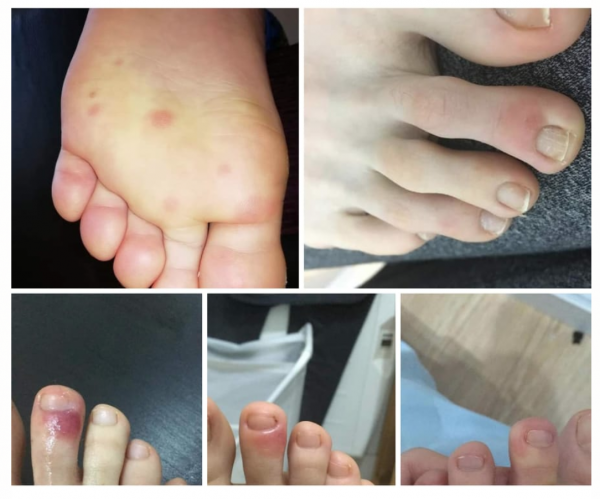 According to The Daily Mail, a statement was shared by the Spanish General Council of Official Podiatrist Colleges that revealed this finding. The statement described patients who had lesions that were purple and were similar to those of chilblains, measles, and chickenpox that are caused by the inflammation of blood vessels.

The statement also said that according to podiatrists and dermatologists in Spain, "The symptoms are 'increasingly being detected in patients with COVID -19, especially children and adolescents. The marks have also been seen in adults, and normally heal without leaving a scar or similar. '"

The college has at least 7,500 members altogether, and they have also said that similar observations were done in France and Italy. Medical experts in Spain have been trying to collect a database of people who have already tested positive with this kind of symptom.

From various Spanish health centers, dermatologists are now doing COVID-Skin studies to try and classify these lesions and bruises that have been appearing on patients with COVID-19.

The General Council of Official Colleges of Podiatrists has already advised quarantining those who are spotted with markings but not to act with "unfounded alarmism."

Dr. Daniel Gordin, an NHS GP currently based in London, has said that "It would be far from surprising if it turned out to be true that COVID-19 causes symptoms in the skin. These findings are just cased reports at present, and more work will need to be done by scientists to find out if there is a significant association."