Two-thirds of seriously sick COVID-19 patients saw their condition improve after receiving the experimental drug Remdesivir, according to research sponsored by Gilead Sciences. 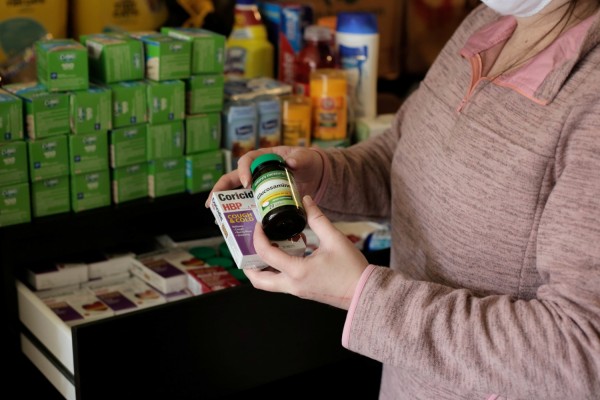 (Photo : REUTERS/David Ryder)
Denise Alexander holds medicines at her home to be delivered on behalf of a Facebook group of volunteers she founded called "Quarantined, I need help! King County Washington," during the coronavirus disease (COVID-19) outbreak in Seattle, Washington, U.S., April 3, 2020.

Remdesivir was initially developed to treat Ebola and has been found to have antiviral qualities that could fight against coronaviruses.

In a study recently published in the New England Journal of Medicine, Gilead Science stated scientific trials had been administered amongst 53 patients.

"We cannot draw definitive conclusions from these data," said Jonathan D Grein, director of hospital epidemiology at Cedars-Sinai Medical Centre. Grein, who serves as the study lead author, added the observations from this organization of hospitalized patients who received remdesivir are "hopeful."

Patients hospitalized in the US, Canada, Europe, and Japan "improved," half of which were released

Of these patients, 22 were in the United States, 22 in Europe and Canada, and nine in Japan. They acquired 200 mg injection of remdesivir on the first day, followed through 100mg a day for the remaining nine days of treatment.

Researchers stated in a median follow-up period of 18 days, 36 patients on oxygen aid had improved, along with 17 out of 30 patients who had been receiving ventilators. A total of 25 patients had been discharged.

However, there is no way to know the probability of improving without the drug since there has been no comparison group, DailyMail reported.

These adverse events have been in more common in patients receiving invasive airflow. Twelve of them had critical destructive signs and symptoms, which blanketed multiple-organ-disorder syndrome, septic shock, acute kidney damage, and hypotension.

ALSO READ: Coronavirus Cure: Here Are Six Other Drugs Beyond Hydroxychloroquine That Could Possibly Treat COVID-19

Researchers admitted the bounds of the test because of the small length of the cohort and the relatively brief follow-up duration.

Gilead Sciences said it runs two phases, three studies in regions with high cases of COVID-19 worldwide. The scientists are aiming to answer whether or not treatment duration could be shortened from 10 days to five days.

In an open letter on Saturday, the enterprise stated seven medical trials had been released around the region to decide whether remdesivir is a safe and effective remedy for COVID-19.

The first trials passed off in early February in 10 hospitals in China's Wuhan, in which the country's epidemic instances had been first recorded. The experiments were for sufferers with severe and slight symptoms of the disease.

The organization was also aware that clinical testing for patients with extreme symptoms in China was stopped because of the lack of eligible patients. The trial initially aimed to test 452 extreme cases but only had at least 200 patients, SCMP reported.

The study was conducted by researchers in China, and the suspension was published on Wednesday on clinicaltrials.gov, a database maintained by the US National Institutes of Health.

Brian Abrahams, an analyst at Royal Bank of Canada, said that the company remains to conduct studies among patients, but veering away data from the China trial.

According to BioSpace, Abrahams believes that halting the trial is proof that the drug had constrained efficacy.