The US Food and Drug Administration (FDA) warned on Thursday, May 14, about a COVID-19 diagnostic test that could be giving inaccurate results.

The test kit is developed by Abbott Lab and promises to deliver results within 5 to 13 minutes. President Donald Trump recently called the test kit a game-changer in a White House event three days after the FDA issued an emergency use authorization to fast-track its approval. 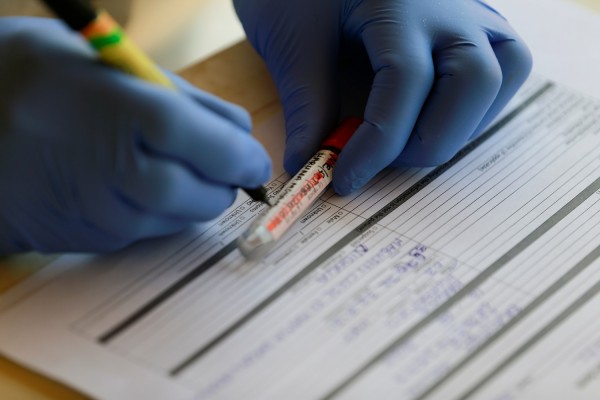 (Photo : REUTERS/Afolabi Sotunde)
A medical health worker marks a sample testing kit during a community testing exercise, as authorities race to contain the spread of the coronavirus disease (COVID-19) in Abuja, Nigeria April 16, 2020.

According to a report from the Chicago Sun Times, researchers from New York University's Langone Health found that Abbot's rapid testing kit gave false-negative results to over 48% of samples compared to those tested using dry nasal swabs. In another test, it failed to give positive results on a third of those cases confirmed by nasopharyngeal swabs in viral transport medium.

Abbott defense: The study is inconsistent

Although the study has not yet been peer-reviewed, Abbott was quick to defend themselves. The pharmaceutical company claimed on Wednesday, May 13, that the study results are inconsistent with other studies and its sample size was very small.

While Abbott admits that no test is perfect, they argue that test results depend on various factors "including patient selection, specimen type, collection, handling, storage, and transport. More importantly, conformity to how the kit was designed affects the result, in which Abbott disputes that ID NOW is intended to be used near the patient with a direct swab test method."

On Thursday, May 14, the FDA said patients who received negative results using the Abbott test may need to be retested with a more sensitive test.

Dr. Tim Stenzel, director of the Office of In Vitro Diagnostics and Radiological Health in the FDA's Center for Devices and Radiological Health, said in a statement that they are still assessing the reports regarding erroneous results while in constant contact with Abbott regarding this issue. He also confirmed that they are continuously studying the available data and are working with Abbott "to create additional mechanisms for studying the test."

Nevertheless, Stenzel said the test can still be used as it can identify positive cases in minutes, "although negative results may need to be confirmed with a high-sensitivity authorized molecular test." The agency said they have received at least 15 adverse reports concerning Abbott's test.

The FDA also said that it will be sharing information in "the spirit of transparency" while Abbott will send letters alerting users that negative test results that are inconsistent with the patient's clinical symptoms would require a confirmation from another test.

Following this FDA announcement, shares of Abbott fell 1.8% to $92.16 in New York on Wednesday. They started up 6.1% early this year.

Meanwhile, a local physician aired his doubt over Abbott's kit. Dr. Rahul Khare offers coronavirus testing in his Lincoln Park clinic, but he prefers to use polymerase chain reaction tests, which he sends to another lab for processing that brings the results after three days.

Khare, who is the founder of Innovative Express Care, told The Chicago SunTimes that he is "very particular about the tests" he uses and he has not even considered using Abbot's kit.

He scrutinized Abbott's technology of using a DNA amplifier. He said the problem lies when an insufficient amount of the specimen is used because the test becomes invalid. "And on top of that, I know that that's just not as best of technology as PCR," Khare added.

Abbott's ID NOW was one of the first rapid testing kits available in the market. Mass testing is a significant indicator of whether the government can ease the coronavirus lockdown.

Read also: WHO: Coronavirus 'May Never Go Away' and We Will Have to Learn to Live with It