Most of those who have played Tony Hawk's Pro Skater when they were kids have obviously matured into adults. And the same goes for all the professional skaters that were in the game being controlled by those players.

Fortunately for Activision, and thanks to Vicarious Vision's new scan technology, the future remaster for both games will feature the pro skaters all in their present appearances. 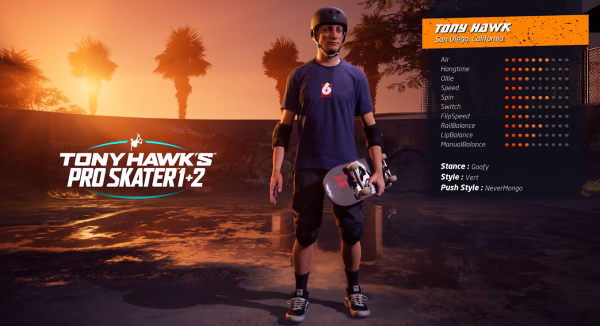 Every professional skater that appeared on the Tony Hawk's Pro Skater 1 and 2 will be returning for its remastered versions. According to reports by Game Informer and Kotaku, these new scans that were done for the remasters mean that they will not look young as they were in the 1999 games. They will closely match how they look today in the official gameplay footage that was released a few days ago.

According to Kotaku, "Tony Hawk, who turned 52 earlier this week, definitely raided the old folks' home while recruiting skaters for the remastered games. Rodney Mullen, perhaps the greatest skateboarder of all time and Massachusetts Institute of Technology fellow, is 53. The grizzled Chad Muska turns 43 next week. Andrew Reynolds will be 42 in June. Elissa Steamer? 44. Steve Caballero is practically a grandpa at 55. And while it's obvious they've aged a bit, they all look great! The passage of time is wonderful and terrifying."

Two from the most loved skateboarding video game are getting remastered and are officially coming to several platforms in just a few months, as reported by Tech Times.

From the same studio that brought us the trilogy of Crash Bandicoot back in 2017, Vicarious Visions will be returning to develop the remasters for THPS. A lot of features will also be returning aside from the pro skaters. This includes original tricks and updated ones from laster titles, soundtracks and new game modes.

"Tony Hawk's Pro Skater 1 and 2 will be sporting a price tag of $39.99, the digital deluxe version with unique content and in-game gear added will go for $49.99. For the collector's edition, it will be available for almost $100 and will include the deluxe version content as well as a limited-run Birdhouse deck," Tech Times added.

Fans are really excited and are ready to love everything about the feature. Seeing that all these skateboarding legends come together once again is incredibly nostalgic for all who played the original titles and were inspired to skate because of the game.

THPS 1 and 2 will be available on Playstation 4, Xbox One, and PC on September 4.

Read Also: Can't Get Enough of Final Fantasy 7 Remake's Cloud in a Dress? There's a Mod for it Now; Plus What We Know About Episode 2