President Trump Reveals He's Taking The Anti-Malaria Drug Hydroxychloroquine 'For About a Week and a Half.'

The United States President Donald Trump informed the world on Monday. May 18, that he is taking the drug of hydroxychloroquine, an anti-malarial drug "for about a week and a half." 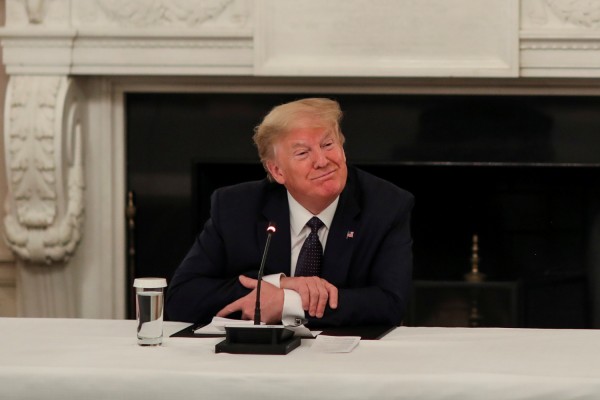 Read More: COVID-19 Vaccine Moves to Phase 2 After 100% Success From Phase 1 Trial; Best Case Scenario is Vaccine Will Be Available This Year or Early 2021

What's The Reason Behind President Trump's Shift in Tactics

President Trump said that he has always been tested negative for the virus and shows no signs of any symptoms relating to COVID-19. He only took the anti-malaria drug as a means for a preventive measure against the deadly coronavirus.

The President said that he's taking the pill every day and he combines it with zinc; when he was asked why he had this to say, "Because I think it's good. I've heard a lot of good stories."

Over the last couple of weeks, the U.S. President has shown great interest in the drug hydroxychloroquine, as well as actively promoting the drug despite what other health officials have stated. Regardless, his status shows a lot of weight on the authenticity of the drug.

President Trump's latest announcement came unexpectedly. Thus, he immediately grabbed headlines all over the world by saying, "You'd be surprised at how many people are taking it, especially the front-line workers before you catch it. The front-line workers -- many, many are taking it. I happen to be taking it," he said that in front of all the reporters in attendance at the White House meeting, which is solely devoted to the struggling restaurant industry.

"I'm taking it, hydroxychloroquine, right now, yeah. A couple of weeks ago, I started taking it," the President was proud to say.

President Trump has already received the green light from the White House physician but insisted that not the doctor but the President would be first in line to take the initial step.

Read More: Loss of Smell and Taste is Officially Added to List of New Coronavirus Symptoms

President Trump is Getting Praise

Trump said that he had received an influx of "positive calls" from people, telling him about hydroxychloroquine. He even went on and mentioned that he was able to receive a call from a New York doctor who reportedly gave the medicine to hundreds of patients under his or her care and said, "I haven't lost one."

Although some health experts doubted the effects of the malaria drug, Trump said there was nothing to lose by simply trying to test out possible treatments. "It seems to have an impact, and maybe it does, maybe it doesn't, but if it doesn't, you're not going to get sick or die, I take a pill every day. At some point, I'll stop."

On his address, the President was able to convey that he showed "zero symptoms happily."

Read More: Coronavirus: Are Your Hands Tingling? Don't Ignore as it Might be a Symptom of COVID-19