After years of hard work, Hong Kong scientists might have created a breakthrough design of an artificial eye that is solar-powered and mimics an actual human eye, according to a report from Engadget.

Hong Kong University of Science and Technology researcher Zhiyong Fan and his colleagues have developed a visual sensor that imitates the actual human eye structure.

New Scientist reported that the artificial eye is like the real one that has a lens to focus light, and a retina which is located at the back of the eye. It is where photosensitive cells produce electrical impulses that are sent to the brain. 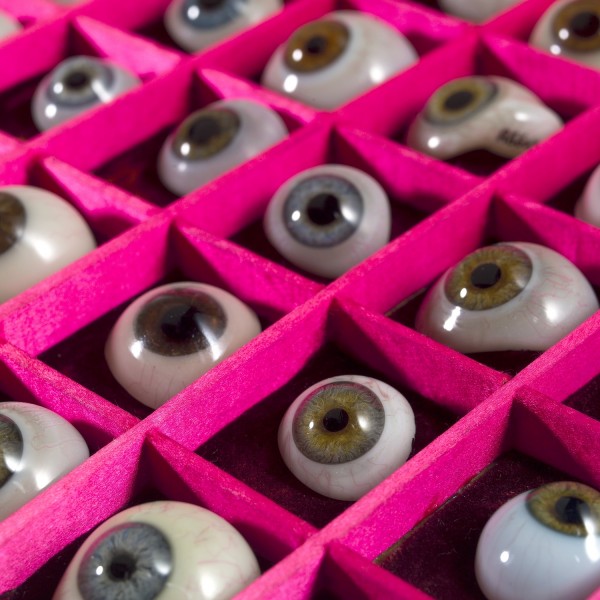 (Photo : Wellcome Images/Wiki Commons)
A case filled with a selection of 50 glass eyes. Possibly made by E. Muller of Liverpool.

The cyborg eye's functions and structures are similar to the human eye. An array of nanowire photosensors is built inside a hemispherical membrane made of aluminum oxide that serves as the retina. Wires made of a liquid metal, which is a eutectic gallium-indium alloy, replicate nerves that send signals from the sensors to external processing. It also copies the gel between the lens and retina called vitreous humor with an ionic liquid.

Meanwhile, it requires additional things to keep it properly working. This includes an indium layer that helps improve the electrical contact while a silicone polymer socket holds the sensors and wires to remain aligned.

This isn't just about cosmetic similarity. In some ways, it's close and even superior to organic eyes. Its responsivity is nearly the same across the visible light spectrum, while its response and recovery times are faster. The nanowires are even denser than the photoreceptors in a real eye.

It'll be a long while before an artificial eye like this is ready to restore sight. Its 100-degree diagonal viewing angle isn't as wide as the 130 degrees of the real thing, although that can be improved. The total light-detecting area is just 0.08in wide, and its 100-pixel resolution is well below what you'd need for a meaningful image. The current manufacturing process is also expensive and slow, while there's a chance the materials will lose effectiveness over time.

Still, this promises to be a milestone for cyborg's eyes. With enough refinement, this could lead to implants that restore eyesight while preserving the natural look. The scientists also believe they could one day power the eye with sunlight--you might not need a separate power source, at least until it gets dark.

A solar-powered eye for the blind

A cyborg eye that can be powered by the sun can eventually aid the blind to see. Like an adult human eye, this artificial eye measures 2 centimeters while its center is filled with a conductive fluid. Also, the artificial retina acts like the human eye, diffusing electrical signals when activated by light. 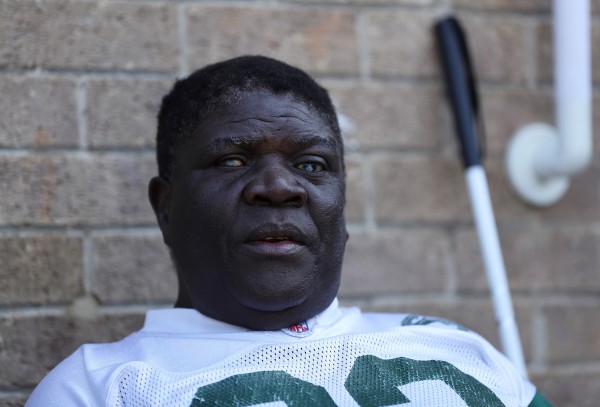 (Photo : REUTERS/Lee Smith)
Rudo Moyo (59) who is blind poses for a photograph whilst walking a lap in his garden to raise money for the NHS. He is walking 260 laps of his garden for ten days, following the outbreak of the coronavirus disease (COVID-19) in Washington, County Durham, Britain, April 25, 2020.

To test if the artificial eye works, Fan and his team projected images of letters and hooked it up to a computer. The test shows that the eye was able to identify the letters E, I, and Y. According to the team, the eye can theoretically be connected to an optic nerve to act the same and to test whether the device is medically safe.

Currently, the eye requires an external power source, but the team is working on making it self-reliant in the future. "Each nanowire can function as a small solar cell," Fan told NewScientist adding that if it works, then the external power is no longer needed.

Fan also said that while the eye has low image resolution than commercial sensors, other existing visual prosthetic devices do not conform to the human eye because they use flat image sensors. This limits the field of view of the artificial eye, unlike the human eye that has a 150 degrees field of vision.