Wireless earbuds have been around for decades. However, it's only in the last few years that the device once associated with businessmen and women on calls has transformed into a lifestyle accessory for people of various jobs and ages. Now, form matters just as much as function. And the new EarFun Air promises to deliver on both--and a little bit more.

The earbuds recently earned the CES 2020 Innovation Honoree designation, the company's second after their breakout earbuds, the EarFun Free received the same honor.

According to a company release, "While the new Air retains the same high-value, high-performing formula as the successful Free, it receives further acclaim with its most recent scoring of the iF Design Award for both Tech and Design." 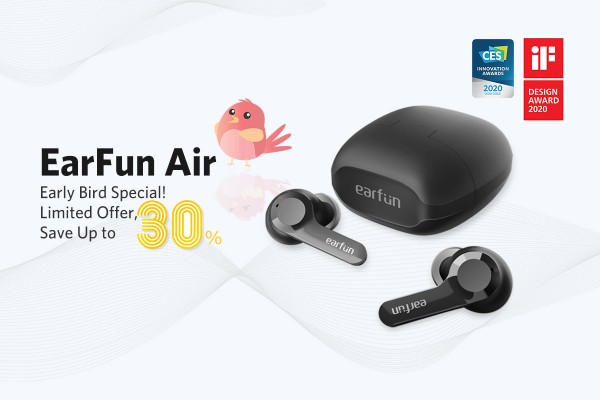 The earbuds debut this month promising several new improvements in its design and audio capabilities. On the former, the company says the product went through endless modeling tests on thousands of ear shapes to produce an ergonomic design that fits snugly into your ear without producing strain after hours of use.

But let's talk about the most important part: sound. The EarFun Air will host new custom-built Composite Bio-cellulose drivers that, according to the company, "[produces] a superior sound compared to its competitive segment."

Features include a new 4-Microphone setup with Noise Cancellation technology to improve call quality and noise filtration, In-EarDetection and Single Earbud Mode, Intuitive Touch Control to give listeners more control over their input source, and the utilization of their award-winning proprietary waterproofing tech called SweatShield (IPX7).

It's Bluetooth v5.0 can give you six hours of runtime, and an additional 24 hours when using the USBC type chargeable case. It also has a Qi Wireless Charging if you happen to misplace your charger.

Control your music, calls and voice assistant simply through intuitive touchpad technology built into both earbuds. Its smart design feature allows you to activate Google Assistant or Siri with a convenient triple taps on the right/ or left earbud.

EarFun was established in 2018 by a collective of experienced industrial designers, acoustic engineers, and music enthusiasts who share the common goal of creating next-generation wireless audio devices.

According to the company, EarFun will offer an early bird special for Earfun Air on May 14. Expect up to 30% off the retail price for a limited time.
off for a limited time. It will be available on Amazon US on May 28. Visit the EarFun website to find out more.