After an hour of being detained, a CNN crew is finally freed after they were arrested while reporting live from Minneapolis, covering the community's ongoing protest against the Minneapolis Police Department after the death of George Floyd. 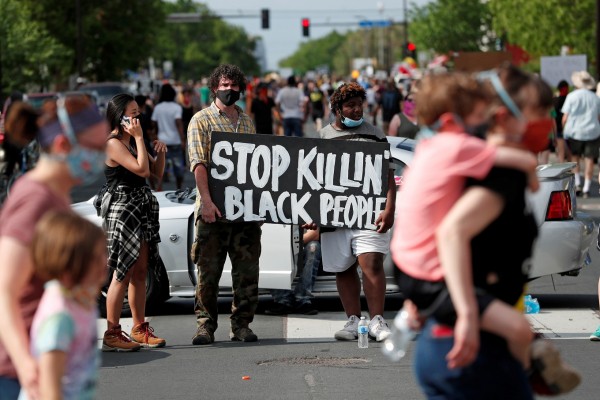 (Photo : ERIC MILLER/REUTERS)
Minneapolis citizens have gathered together to protest the death of George Floyd in the hands of Minneapolis PD.

The Arrest of a Black CNN Reporter

According to a report by CNN, their crew was doing a live report Friday morning, May 29, at around 5 a.m. CT (6:00 a.m. ET) covering the events of the protests in downtown Minneapolis near a police precinct that was set ablaze by protesters.

Minnesota police arrest CNN reporter and camera crew as they report from protests in Minneapolis https://t.co/oZdqBti776 pic.twitter.com/3QbeTjD5ed — CNN (@CNN) May 29, 2020

While reporting, the state patrol detained CNN correspondent Omar Jimenez, his cameraman, and his producer. They were brought to the city's downtown public safety building where they remained for around an hour before being released.

The arrest was captured on camera and soon went viral.

After the incident, Minnesota Governor Tim Walz said to CNN Worldwide President Jeff Zucker that he was deeply sorry for what had transpired and will do his best to have the crew released.

Shortly after 6:00 a.m. CT (7:00 a.m. ET), Jimenez and others, including photojournalist Leonel Mendez and producer Bill Kirkos, were freed after the police had guaranteed that they were journalists.

After getting his freedom, Jimenez immediately went live and reported that he was treated well, and everything was "cordial" after his arrest and until he was taken away. "We're doing OK, now. There were a few uneasy moments there," Jimenez said.

CNN’s @OmarJimenez and his crew have been released from police custody. He recounts getting arrested and what happened while they were in custody. https://t.co/v3kMq77Oro pic.twitter.com/JoqmwlTc5i — CNN (@CNN) May 29, 2020

According to a report by the Daily Mail, a member of the crew said that they had been detained because the police said they were being arrested for refusing to move when they were told to move.

Nevertheless, Jimenez can be heard on camera saying, "Put us back to where you want us - wherever you'd want us, we'll go. Just let us know."

He also even told the police that was putting handcuffs on him that they were live on air.

Reporters from various networks have been covering the same event and were also reporting live, but apparently did not receive the same treatment as Jimenez and his team.

The protests have been happening for a few days already after the death of George Floyd, a Minneapolis man who was arrested and died in the hands of the police as one badged man kneeled on his neck until he suffocated.

The scene was caught on camera and also quickly got viral.

Floyd's family is asking for justice and wanted the four policemen involved in his death to be implicated, but, according to BBC, prosecutors are still gathering evidence.

Minneapolis citizens have gathered to protest to have the four policemen arrested, but on the third night, some protesters set a Minneapolis precinct on fire.

Demonstrations around the United States have also started taking place, including in Los Angeles, Memphis, New York, Chicago, Phoenix, and Denver in support of Floyd and all the black people that have received unfair treatment from the authority.