An American Airlines flight attendant claimed that she was not allowed to wear a face shield because it does not fit in with American Airlines' "image standards," according to a report in The Sun.

To stop the spread of COVID-19, the stewardess from Worchester, Massachusetts wore an $8 plastic face shield on a few flights when she returned to work on May 2. She posted a selfie on Facebook wearing the face shield over an N95 mask while onboard a flight from Boston to Dallas. The flight attendant named "Marie" explained that it was her first flight after resting for a month due to canceled trips.

However, as Boston Globe reported, she was told by her supervisor that masks were not a part of American Airlines' "image standards" and passengers do not like to see attendants wearing them. Her supervisors even suggested her to go on leave if she does not feel safe on their aircraft, which left the attendant upset. Nevertheless, she kept wearing her personal protective equipment (PPE).

Last week, American Airlines reportedly advised flight attendants that face shields "could pose a safety hazard" and banned them from wearing the PPE.

The memo said that the Federal Aviation Administration has not approved the use of a facial mask for regular use on-board an aircraft. It also highlighted that "no other U.S. carriers permit flight attendants to wear face shields" while they are on flight operations.

An American Airlines spokesperson told The Sun on Thursday, May 28, that "the CDC does not recommend using a face shield along with a face covering."

Marie said she wanted to wear a face shield to prevent the rapid spread of the deadly bug in confined spaces like airplanes, but the carrier maintained their decision, citing federal guidelines. 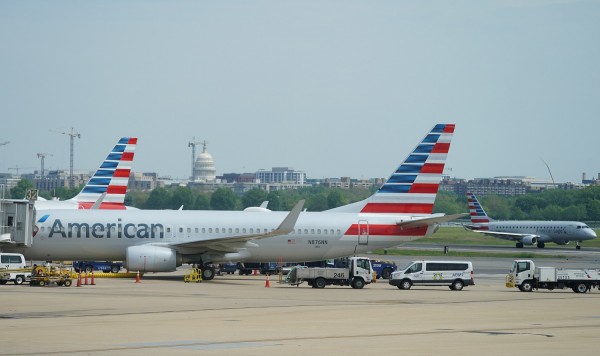 (Photo : REUTERS/Kevin Lamarque)
An American Airlines Boeing 737 jet sits at a gate at Washington's Reagan National airport with the U.S. Capitol building in the background, in Washington, U.S., April 29, 2020.

Meanwhile, the FAA previously said it does not need to pre-approve the PPE worn by a flight attendant if it does not impede them from performing safety-related tasks.

"Although the FAA's statutory authority is to regulate the safe operation of civil aircraft, we are lending aviation expertise to federal public health agencies and airlines as they issue guidance for crew members, including health monitoring, screening protocols, and aircraft cleaning," an FAA representative said.

This refers to the agency's Safety Alert for Operators guidelines and CDC advice "that air carriers and crew members should follow."

Meanwhile, the Association of Professional Flight Attendants (APFA) said it "is working with the company now on this issue" as well as communicating with American airlines about safety protocols.

Meanwhile, Thomas Houdek, the union's safety chair, said Marie's derogatory social media posts had "predetermined the outcome of this case." He also added that this issue would have not become so big "if she had just worn it in flight and didn't call attention to herself" when she posted it on social media.

Marie is determined to wear her face shield while inside the terminal, but she would replace it with goggles when she stepped onto the plane.

Should you ban face shields?

There is conflicting advice about how to stay safe and protected against the coronavirus, according to Forbes.

A study published in the Proceedings of the National Academy of Sciences (PNAS) showed more evidence for mask-wearing while in enclosed areas with other people.

For this study, Valentyn Stadnytskyi, Adriaan Bax, and Philip Anfinrud from the Laboratory of Chemical Physics at the National Institute of Diabetes and Digestive and Kidney Diseases (NIDDK) and Christina E. Bax from the University of Pennsylvania Perelman School of Medicine asked a person to repeatedly say the phrase "stay healthy" into a box for 25 seconds. These words were spoken loud enough.

Researchers found that the person emitted about 2,600 small fluid droplets for every second of speaking. Although some of these droplets could dry up within seconds, some could stay afloat in the air for a while.

Another study published in Nature suggested that a fluid droplet from an infected person could contain 7 million viruses per milliliter on average. However, an infection can be prevented if a person wears a mask or other face coverings that could potentially catch at least some of these droplets.

But why are they saying that face shields may pose a hazardous risk?

When people wear their face shields and N95 respirators inappropriately, they will have a "false sense of security" that leads to an even greater risk of being infected because of mishandling the PPE.

The face shield catches any virus that may be present in the air. If the person touches the outside of the PPE, which may be contaminated by the virus, without cleaning it or properly washing the hands after, then the virus may be passed on to him or herself or other people.

This boils back to the importance of proper hygiene, particularly of proper and frequent hand washing.