Mirrorless full-frame dominates the market in providing a top-notch quality of photo and video matching the industry's standards.

Panasonic will soon launch their new mirrorless interchangeable-lens full-frame camera, Lumix S5, that is slightly smaller than the S1, bringing a serious threat to the range of entry-levels. Full-frame entry-level cameras from Sony, Nikon, and Canon's EOS R6 will soon meet its new competitor.

Peta Pixel announces this new camera by Panasonic to be a serious competitor that will embody a full frame's sensor into a small body of a mirrorless. Sony was the first to launch this compact trend in Digital Single Lens Reflex or DSLR cameras.

The EOS R6 is recently unveiled by Canon to be its entry-level full-frame, succeeding the popular EOS 6D Mk II. This is Canon's take on the mirrorless that will be launched on the coming August 27, 2020. Panasonic aims to rival this particular Canon camera that might offer the same spec sheet with a lower value.

ALSO READ: US Ban: Only 5% Chinese Users Still Want to Use iPhone After WeChat Ban

Panasonic Stepping Up to its Competitions

Panasonic still enters the market for the full-frame, mirrorless, interchangeable-lens camera despite having multiple tough competitions that are introduced earlier in the industry. This shows the company's eagerness to showcase their camera and what it has to offer to suit customer preferences.

Peta Pixel stated that a tweet in Japan's shooting grip manual accidentally showed a "DC-S5" on its camera list. This leak was then removed, and no further mentions or talks followed.

However, a recent tweet by Nokishita (@nokishita_c) in Japanese, confirmed the rumor of Panasonic's new camera is legitimate and is registered to the US market as of now. 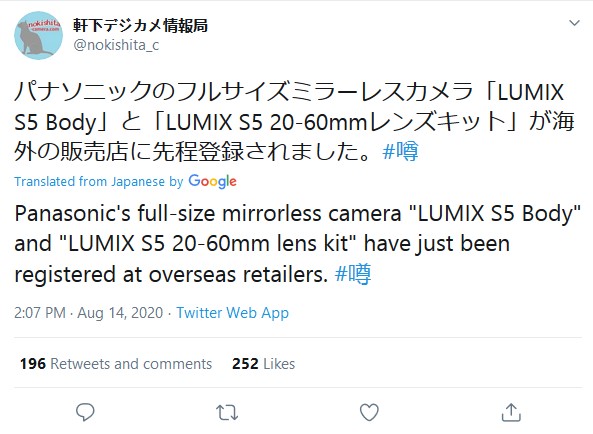 Panasonic's Lumix S5 comes along with its "Lumix S5 20-60mm lens kit" and will soon be available in the US market. Nokishita also released a full-spec sheet that allegedly gives the public an overview of the product in a Google drive document published on his Twitter account. This tweet follows the initial tweet about the camera's confirmation and registration in the US market, a day after.

Mirrorless cameras boast of innovation into the world of photography that provides a more compact and lighter body compared to DSLRs. By removing the optical reflex mirror that is the mainstay of DSLRs, Mirrorless directly use the imaging sensors of the camera and provides a digital preview in LCDs or the electronic viewfinder of the camera.

Initially, mirrorless cameras removed the viewfinder or the scope that photographers peek into when using DSLRs. Optical mirrors reflect the image from the lens and direct it to the optical viewfinder. This innovation removed a large part of the camera that enabled it to be more compact but not necessarily taking away its photo and video qualities. 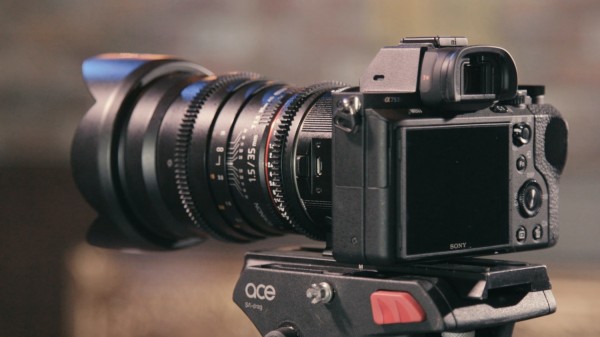 Full-frame cameras, on the other hand, are cameras that embody full-frame sensors that allow users to take photos with sharp quality and even on low light settings. These type of cameras capture pixels in a larger area or surface, gathering more light and bits that are directly concerned with image quality.

Full-frames are best known for their "no-crop" functions and capture the image wholly, as taken by the lens and seen by the eye.

Now, camera manufacturers offer an electronic viewfinder that mirrors the optical's function and feel. Current mirrorless cameras offer a small and compact body that can deliver the quality of a full-frame camera usually found on bulky and huge DSLRs that were the forefront in the market and industry standards.