En Masse Entertainment Will Shut Down, Ensures "Seamless Transition" for Tera and Closers

En Masse Entertainment announced on its Facebook page on Monday, August 17, that it will be closing its business, but Tera and Closure will continue to have support.

"Today, it is with a heavy heart that we begin the process of discontinuing the business," En Masse wrote in the Facebook post. 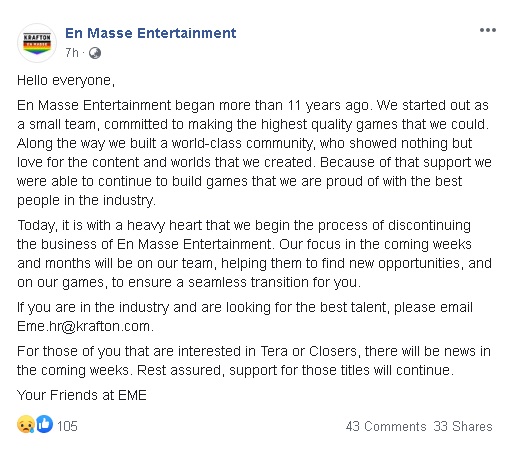 (Photo : En Masse Entertainment/Facebook )
Today, it is with a heavy heart that we begin the process of discontinuing the business

En Masse is the publisher of the old-time favorite massively-multiplayer online role-playing game (MMORPG) Tera, bringing the game in North America and Europe since 2012. Despite its closure, Kotaku reported that En masse ensures the public that the game will continue to have support, although updates on the status of Tera and Closure can be expected in the coming weeks. "Rest assured, support for those titles will continue," the company added.

The game publisher also promised to assist its employees who are affected by the company's decision to seek new opportunities in the meantime. En Masse will also focus on the games "to ensure a seamless transition" in the coming weeks.

En Masse is established in 2008 by Krafton Game Union, a South Korean video game holding company. A year after bringing Tera to the West, the game became free-to-play in 2013. The game had more than 25 million players across the globe as it was also ported to PS4 and Xbox One, although the console versions also experienced bugs. Recently, Tera shows its daily players peaks at about 1,000 on Steam.

Aside from Tera, En Masse also publishes other games like Closers, The Dark Crystal, and Stranger Things 3.

Meanwhile, the recent closure announcement seemed to put the future of its games on hold, but En Masse ensured the gaming public that it will not shut down the Tera and Closure anytime soon.

Read also: New Call of Duty: Warzone Season 5 Gun Statistics: How AN-94 and ISO SMG Rank in 'Quickest to Kill'

Netizens assume that Krafton's other studio, Bluehole will take over Tera and Closers once En Masses shut down its business completely. The Seoul Korean-based Bluehole Inc. publishes Tera for its Southeast Asian market. 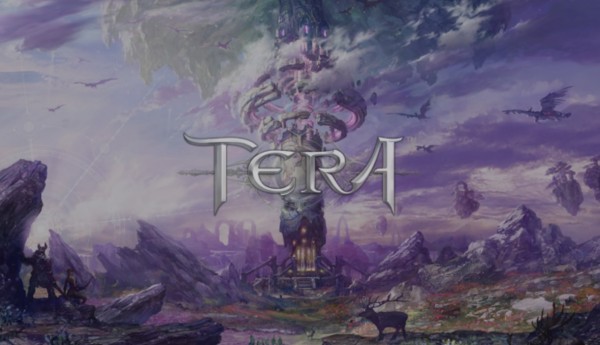 (Photo : Krafton)
En Masse will also focus on the games “to ensure a seamless transition.”

Bluehole is also the developer for PlayerUnknown's Battlegrounds, but the company reportedly created a separate subsidiary called PUBG Corporation in 2017 after the huge success of the game in its first six months, reaching 10 million copies sold.

Tera: its shares of ups and downs

Tera's fans were saddened by the recent announcement of its publisher's closure. One user said that he "was very sad" about the news, "but it was expected." Another sad gamer thanked the company "for all the years of great gaming."

Meanwhile, George DePree was pondered in the early days of his gaming experience. "All my best to everyone impacted. You were the source of many fond memories during the alpha/beta/launch days for TERA," he said.

DePree also hoped the company could "find new studios in the Seattle area within a short timeframe."

The Korean imported game Tera was almost similar to other fantasy MMO games in the past decade. However, on the earlier review, Kotaku said the game is worth to play, despite its heavy reliance on traditional mechanics of multiplayer role-playing games. It remained to be an addictive active combat system.

Read also: Crunchyroll Rumored To Be The Next Target? Where to Stream Anime Legally

This is owned by Tech Times.
Written by CJ Robles