A novel coronavirus conspiracy movie sequel "Plandemic: Indoctornation" is banned by social media giant, Facebook, after its initial release facilitated a widespread proliferation of misinformation about the COVID-19 pandemic.

Freedom Platform TV is the production company behind the short movie that is considered a conspiracy theory that contains false information. The film is currently available on their website and can be streamed online.

One of the world's largest social media platform, Facebook, recently banned the movie and its link to be shared around the website due to its nature that gives unverified and unfactual information about the global pandemic, COVID-19. Mashable reports that it is banned just this Tuesday, August 18.

Currently, Facebook sharing of the link and video itself is prohibited and immediately flagged by the social media. A pop-up message will appear: "You can't post this" and that the URL is spam that goes against Facebook's Community Standards.

A series of pop-up messages will also appear on user's computers as they attempt to post on the platform explaining how the link is a violation and potential threat to Facebook's community. 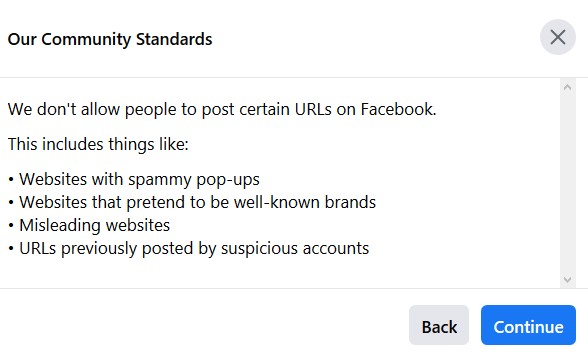 The first Plandemic movie became viral on social media that took on a different approach to the coronavirus, falsely saying that beach sand can build immunity against the disease. However, this is denied and rejected by scientists and medical experts as it poses misinformation that may lead people to believe.

Despite the threat and misinformation it brings, conspiracy theorists and followers still believe that this is the "correct" information and is an "eye-opener" to non-believers.

The first 26-minute video revolves around the Novel coronavirus being a hoax used as ways and means by the government and several industry leaders to scare and profit from people.

The film also focused on QAnon's theory that the current US government led by President Donald Trump is fighting a satanic underground organization made up of elites and Hollywood personalities that exploits children and use them as sex slaves.

The sequel to the conspiracy movie "Plandemic" which was initially released in May, is revealed by its producers as a full-length documentary that expands more on the themes present in the first film.

The Verge stated that the movie expands more on the conspiracy that the pandemic is brought by those who have remarkable influences and that the disease is staged. Plandemic: Indoctornation even mentioned that Microsoft co-Founder Bill Gates orchestrated the release of the pandemic that endangered the world.

New York Times Reporter, Davey Alba, shared his thoughts about the sequel on his Twitter account (@daveyalba), which created a thread. Alba then pointed out several topics that were stated as misinformation in the film and corrected them with facts and links.

Watching Plandemic 2 live. Already heard a false piece of misinformation stating Dr. Fauci & other medical experts were behind a scheme to profit from the coronavirus pandemic. Here's our story debunking the Fauci/Deep State narrative from back in March https://t.co/uEB8olb3vM — Davey Alba (@daveyalba) August 18, 2020

Alba clarified information about Dr. Judy Mikovits, an anti-vaccine activist and discredited scientist, about not being criminally charged against her false claims that Gates and Dr. Anthony Fauci were the masterminds behind the pandemic to gain profit.

The website currently has compiled separate video interviews of the so-called "experts" on the conspiracy theory film. Supporters and believers of the false information use an alternative link that is yet banned by Facebook to be shared and proliferated online.

Conspiracy theories are being banned by the social media platform, especially during this pandemic, because of the threats and dangers it brings to people who will succumb to it. Misinformation may lead them to believe and do the things that the film promotes.