Social Media enterprise, Facebook, shuts down the largest QAnon conspiracy theory group as it violates, yet again, a series of the website's company policies and community standards.

According to a spokesperson from the social media company, the Facebook group named "Official Q/Qanon" is shut down. The said group had nearly 200,000 members that share posts regarding speculations and conspiracies that form an opinion leading to belief.

Reuters' report stated that a Facebook spokeswoman shared the cases that led to the group's dissolving. The said cases include Facebook users sharing posts concerning bullying and harassment, hate speech, false information, and even posts that could lead or suggest harm to a person.

The Facebook official wished to be nameless and added that the social media network is closely monitoring groups that relate to QAnon or are even believed to be managed by QAnon. Facebook took down the group last Tuesday, August 4, and is currently enforcing a stricter rule over those related to it.

Earlier in May, Reuters said that Facebook already removed a similar group with fewer members and followers. This particular QAnon group spread misleading information about the current global crisis, the COVID-19.

QAnon is recently linked to numerous controversies, including the #SaveThe Children issue that Facebook also banned.

ALSO READ: Wonder Why #SaveTheChildren Was Blocked on Facebook? Check out This Altered Photo of Tom Hanks

QAnon led many to believe a lot of issues and controversies that surround the everyday lives of Americans. As its supporters perceive them as a truth-spitting collective, many are led to believe that they are a harbinger of false news.

New York Times expressed on an opinion piece on their website just how dangerous this group is. The United States' Federal Bureau of Investigation (FBI) even claims the group, QAnon, "one of the most dangerous conspiracy theories posing a domestic threat to the United States."

Conspiracy theories bring little to no truth as they base on speculations and prejudices by a specific person. This collective of people harnessing the power of words to create a different reality and amassing a massive load of followers is sometimes considered a cult.

The organization continues to grow in following and believers as they gather followers through their mass appeal and the use of 'memes.' 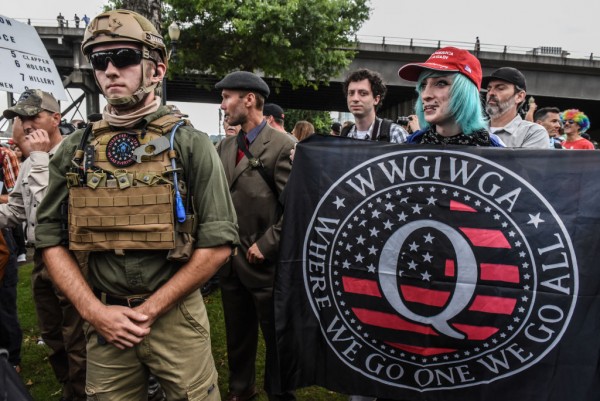 (Photo : (Photo by Stephanie Keith/Getty Images))
PORTLAND, OR - AUGUST 17: A person holds a banner referring to the Qanon conspiracy theory during a alt-right rally on August 17, 2019 in Portland, Oregon. Anti-fascism demonstrators gathered to counter-protest a rally held by far-right, extremist groups.

The group became famous through social media by presenting conspiracy theories that are gravely appealing to the American audience. QAnon cited various conspiracies that revolved around the government, media, and business sectors that riles up the belief of anyone who gets to read their literature.

QAnon grew famous as the group promised people of "the Great Awakening." Atlantic cited that this movement will round up elites and remove them from their spots. After then, the truth will be revealed as no one controls certain places anymore.

The group also conspired about certain Hollywood elites and artists that are claimed to be sexual predators and child molesters. Tom Hanks was recently branded a 'pedophile' and had his Hollywood star vandalized.

Apart from Facebook that made this notable action against QAnon, Twitter is also making a stand in destemming the web of conspiracies that the group shares in their platform. Twitter is direct and vocal in this course of action as the social media company will not tolerate the proliferation of specific content in their platform.