[Warning] NASA Spots FIVE Tropical Cyclones In the Atlantic Basin All at Once! Louisiana and Mississippi Could be Hit by Hurricane Sally!

A recent satellite photo showed five different tropical cyclones all swirling in the known Atlantic basin all at once! The actual National Oceanic & Atmospheric Administration's very own Geostationary Operational Environmental Satellite or GOES have been able to capture the image sometime on Monday afternoon.

The image showed Hurricanes Paulette and Sally, Tropical Depression Rene, and the Tropical Storms known Teddy and Vicky. According to the National Weather Service recently tweeted that this finally ties the record for the largest number of tropical cyclones inside the basin all at one time. 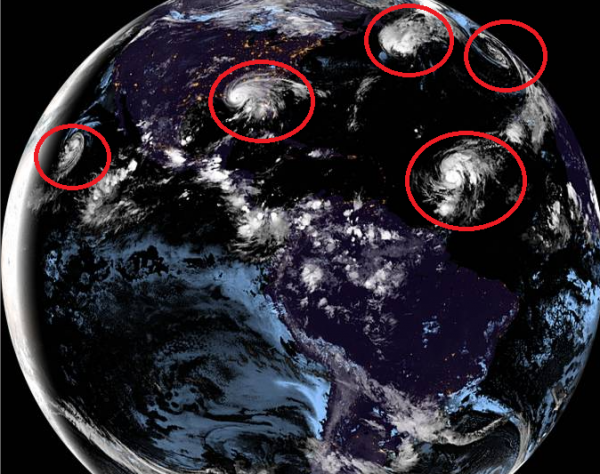 (Photo : Screenshot From star.nesdis.noaa.gov)
[Warning] NASA Spots FIVE Tropical Cyclones In the Atlantic Basin All at Once! Louisiana and Mississippi Could be Hit by Hurricane Sally!

The known Atlantic Ocean, the Gulf of Mexico, and the Caribbean have only held up to this many storms all at one time before, back in September 1971. The known Tropical Depression Rene recently dissipated on Monday night, but the remaining four other storms persist according to the shown image.

Hurricane Sally is apparently churning towards both Mississippi and Louisiana, where the known NHC expects it to actually bring a "historic" and "life-threatening flash flooding".

The whole cluster of Cyclones located in the Atlantic actually comes at the very peak of the known hurricane season, which has actually been especially active so far within this year, with about 20 named stores.

Only a single name, Wilfred, still remains on the current list of 2020 Atlantic cyclone names. If the known National Hurricane Center finally runs out of the conventional names, it will proceed to use the Greek alphabet.

The shown satellite images from both Monday and Tuesday have also shown smoke that is swirling towards the Eastern Coast from the previous unprecedented wildfires all the way in Oregon, California, and also Washington.

Experts are now attributing both the known unprecedented scope of the destructive fires as well as the overly active hurricane season to the worsening climate change. In the case of the known fires, both longer and also a more severe dry season actually fuel larger fires, which can possibly start earlier but still last later into the year.

The dangers within the Atlantic Basin

Located in the Atlantic basin, certain warming waters and air are currently making the hurricanes slower, stronger, and also wetter. Those tropical cyclones feed on the warm water.

The higher water temperatures also eventually lead to rising sea-levels, which in turn also increases the whole risk of flooding during the known high tides and also in the event of actual storm surges.

What adds to this is warmer air actually holds even more atmospheric water vapor, which then enables these tropical storms to both strengthen and unleash even more precipitation. In a study that was conducted recently, researchers were able to find that each new decade that happened over the previous 40 years has been bringing an 8% increase to the total chance that an actual storm will suddenly turn into a major hurricane.